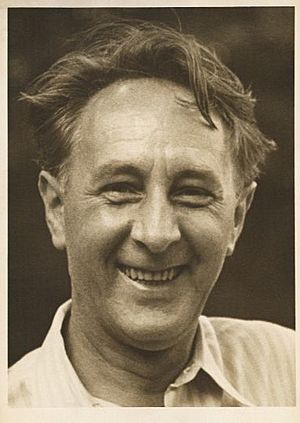 Martinů was born in the tower of a town church and that is where he spent the first seven years of his life, away from the rest of the world. When he was old enough to go to school he had to climb the 193 steps down to the street every day. He started to have violin lessons from the local tailor. He was very shy because he was used to being all by himself with his family in the tower, but he made good progress and in 1905 gave his first violin recital.

Martinů soon started to compose music and nothing else interested him very much. He went to the Prague Conservatory to study the violin but he preferred going to the theatre and reading. In 1909 he changed to the organ school but he did no work and was expelled from school.

He managed to avoid fighting in the World War I by composing. After the war he became a member of the Czech Philharmonic Orchestra, playing second violin.

In 1923 he moved to Paris where he stayed for 17 years. He was very poor. He had some lessons with Albert Roussel and soon became known as a composer. He married in 1931 and his wife worked hard to earn money so that he could spend his time composing. He liked to use Czech folk stories and literature as inspiration for his music.

In 1940 he had to leave Paris to escape from the Nazis. He spent several months living rough, often sleeping on stationplatforms. In March 1941 he and his wife managed to get to New York.

Life in the United States was hard for him. He spoke no English and people there did not know his music. He had left all his scores behind. However, he worked hard and the famous conductor Sergei Koussevitsky asked him to write a symphony. His music still sounded very Czech. After World War II he very much wanted to go back to his own country, but the communist government made that impossible. He had a bad fall and it took him years to recover properly. He taught at Princeton University, then he retired to Nice in France. He died of cancer in Basle.

Bohuslav Martinů wrote a lot of music. He loved sitting down and writing music. Once he had finished a composition he was never very interested in hearing it performed or what happened to it. As a result, some of his music is very good but some of it is less interesting. One of his last works was called Řecké Pašije (The Greek Passion) which uses Greek folk melody and church chant. He was never influenced by American music, he preferred the modes, folktunes, bagpipe drones and mountain calls of his native country. His music can often be described as neoclassical in style.

All content from Kiddle encyclopedia articles (including the article images and facts) can be freely used under Attribution-ShareAlike license, unless stated otherwise. Cite this article:
Bohuslav Martinů Facts for Kids. Kiddle Encyclopedia.