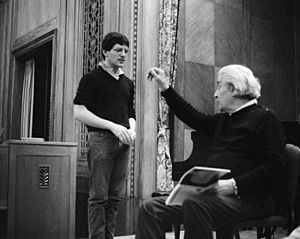 Sergiu Celibidache (pronounce: SER-zhoo Chay-lee-bee-DAH-ke), (born Roman, Romania, 28 June 1912; died 14 August 1996) was a Romanian conductor. He was one of the great conductors of his time, living in Germany all his adult life.

Celibidache was born in Romania. He went to Berlin in 1936 and in 1939 studied there at the Hochschule für Musik. He got a doctorate by writing about the Renaissance composer Josquin Desprez. He was lucky very early in his career to be appointed as conductor of the Berlin Philharmonic Orchestra. He stayed with them until 1952 when Wilhelm Furtwängler returned. He later worked with radio orchestras in Stockholm, Stuttgart and Paris. He also worked for a time in Britain, as well as touring in Europe and South America. From 1979 until his death he was music director of the Munich Philharmonic. He taught at Mainz University in Germany and in 1984 taught at the Curtis Institute in Philadelphia, Pennsylvania. He liked teaching and often let students come to his lessons without having to pay.

Celibidache did not like making recordings, although there are a few recordings of his concerts which have survived. He was well known for asking for lots of rehearsals, and he rehearsed his orchestras in great detail. He often chose very slow speeds for the slow movements and very fast speeds for the fast movements.

All content from Kiddle encyclopedia articles (including the article images and facts) can be freely used under Attribution-ShareAlike license, unless stated otherwise. Cite this article:
Sergiu Celibidache Facts for Kids. Kiddle Encyclopedia.