Joseph Kubert ( September 18, 1926 – August 12, 2012) was a Polish-born American comic book artist, art teacher, and founder of The Kubert School. He is best known for his work on the DC Comics characters Sgt. Rock and Hawkman. He is also known for working on his own creations, such as Tor, Son of Sinbad, and the Viking Prince, and, with writer Robin Moore, the comic strip Tales of the Green Beret. Two of Kubert's sons, Andy Kubert and Adam Kubert, themselves became recognized comic book artists, as did many of Kubert's former students, including Stephen R. Bissette, Amanda Conner, Rick Veitch, Eric Shanower, Steve Lieber, and Scott Kolins.

Kubert was born September 18, 1926 to a Jewish family in Jezierzany in southeast Poland (now Ozeryany in Ukraine). He was the son of Etta (née Reisenberg) and Jacob Kubert. He emigrated to Brooklyn, New York City, United States, at age two months with his parents and his two-and-a-half-year-old sister Ida. Raised in the East New York neighborhood, the son of a kosher butcher, Kubert started drawing at an early age, encouraged by his parents.

In his introduction to his graphic novel Yossel, Kubert wrote, "I got my first paying job as a cartoonist for comic books when I was eleven-and-a-half or twelve years old. Five dollars a page. In 1938, that was a lot of money". Another source, utilizing quotes from Kubert, says in 1938, a school friend who was related to Louis Silberkleit, a principal of MLJ Studios (the future Archie Comics), urged Kubert to visit the company, where he began an unofficial apprenticeship and at age 12 "was allowed to ink a rush job, the pencils of Bob Montana's [teen-humor feature] Archie". Author David Hajdu, who interviewed Kubert and other comics professionals for a 2008 book, reported, however, that, "Kubert has told varying versions of the story of his introduction to the comics business at age ten, sometimes setting it at the comics shop run by Harry "A" Chesler, sometimes at MLJ; however, MLJ did not start operation until 1939, when Kubert was thirteen".

Kubert attended Manhattan's High School of Music and Art. During this time he and classmate Norman Maurer, a future collaborator, would sometimes skip school in order to see publishers. Kubert began honing his craft at the Chesler studio, one of the comic-book packagers that had sprung up in the medium's early days to supply outsourced comics to publishers.

Kubert's first known professional job was penciling and inking the six-page story "Black-Out", starring the character Volton, in Holyoke Publishing's Catman Comics #8 (March 1942; also listed as vol. 2, #13). He would continuing drawing the feature for the next three issues, and was soon doing similar work for Fox Comics' Blue Beetle. Branching into additional art skills, he began coloring the Quality Comics reprints of future industry legend Will Eisner's The Spirit, a seven-page comics feature that originally ran as part of a newspaper Sunday supplement.

Kubert's first work for DC Comics, where he would spend much of his career and produce some of his most notable art, was penciling and inking the 50-page "Seven Soldiers of Victory" superhero-team story in Leading Comics #8 (Fall 1943), published by a DC predecessor company, All-American Publications. Throughout the decade, Kubert's art would appear in comics from Fiction House, Avon, and Harvey Comics, but he otherwise worked exclusively for All-American and DC. Kubert's long association with the Hawkman character began with the story "A Hot Time in the Old Town" in The Big All-American Comic Book (1944). Kubert drew several Hawkman stories in that title as well as in All Star Comics. He and Irwin Hasen drew the debut of the Injustice Society in All Star Comics #37 (Oct. 1947) in a tale written by Robert Kanigher. The Kanigher/Kubert team created the Thorn in Flash Comics #89 (Nov. 1947).

In the 1950s, he became managing editor of St. John Publications, where he, his old classmate Norman Maurer, and Norman's brother Leonard Maurer produced the first 3-D comic books, starting with Three Dimension Comics #1 (Sept. 1953 oversize format, Oct. 1953 standard-size reprint), featuring Mighty Mouse. According to Kubert, it sold a remarkable 1.2 million copies at 25 cents apiece at a time when comics cost a dime.

At St. John, writer Norman Maurer and artist Kubert created the enduring character Tor, a prehistoric-human protagonist who debuted in the comic 1,000,000 Years Ago (Sept. 1953). Tor immediately went on to star in 3-D Comics #2-3 (Oct.-Nov. 1953), followed by a titular, traditionally 2-D comic-book series, written and drawn by Joe Kubert, that premiered with issue #3 (May 1954). The character has since appeared in series from Eclipse Comics, Marvel Comics' Epic imprint, and DC Comics through at least the 1990s. Kubert in the late 1950s unsuccessfully attempted to sell Tor as a newspaper comic strip. The Tor samples consisted of 12 daily strips, reprinted in six pages in Alter Ego vol. 3 #10 and later expanded to 16 pages in DC Comics' Tor #1. He contributed work to Avon Periodicals, where he did science-fiction stories for Strange Worlds and other titles.

Beginning with Our Army at War #32 (March 1955), Kubert began to freelance again for DC Comics, in addition to Lev Gleason Publications and Atlas Comics, the 1950s iteration of Marvel Comics. By the end of the year he was drawing for DC exclusively. DC editor Julius Schwartz assigned Kubert, Robert Kanigher, and Carmine Infantino to the company's first attempt at reviving superheroes: an updated version of the Flash that would appear in Showcase #4 (Oct. 1956). The eventual success of the new, science-fiction oriented Flash heralded the wholesale return of superheroes, and the beginning of what fans and historians call the Silver Age of Comic Books. In the coming years, Kubert would work on such characters as the medieval adventurer the Viking Prince and features starring Sgt. Rock and The Haunted Tank in the war comic G.I. Combat. He and writer Gardner Fox created a new version of Hawkman in The Brave and the Bold #34 (Feb.–March 1961) with the character receiving his own title three years later. Kubert's work on Hawkman and in G.I. Combat would become known as his signature efforts. Kubert's main collaborator on the war comics was writer/editor Kanigher. Their work together on Sgt. Rock is considered a memorable contribution to the comics medium. They introduced Enemy Ace in Our Army at War #151 (Feb. 1965).

From 1965 through 1967 he collaborated with author Robin Moore on the syndicated daily comic strip Tales of the Green Beret for the Chicago Tribune.

Kubert served as DC Comics' director of publications from 1967 to 1976. He made the Unknown Soldier the lead feature of Star Spangled War Stories with issue #151 (June–July 1970) and initiated titles based on such Edgar Rice Burroughs properties as Tarzan and Korak. Comics historian Les Daniels noted that Kubert's "scripts and artwork ranked among the most authentic and effective ever seen." DC Comics writer and executive Paul Levitz stated in 2010 that "Joe Kubert produced an adaptation that Burroughs aficionados could respect." Kubert supervised the production of the comic books Sgt. Rock and Weird Worlds. While performing supervisory duties he continued to draw for some books, notably Tarzan from 1972 to 1975 and drew covers for Rima the Jungle Girl from 1974 to 1975. He edited Limited Collectors' Edition #C–36 which features stories from the Book of Genesis adapted by writer Sheldon Mayer and artist Nestor Redondo. Kubert and Kanigher created Ragman in the first issue (Aug.–Sept. 1976) of that character's short-lived ongoing series. 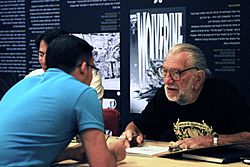 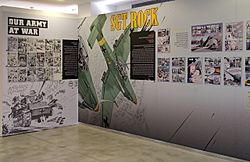 Kubert provided art for several anniversary issues of key DC titles. He and writer Paul Levitz crafted a Hawkman story in Detective Comics #500 (March 1981). Kubert was one of the artists on the double-sized Justice League of America #200 (March 1982) as well as Batman #400 (Oct. 1986).

He wrote and drew a collection of faith-based comic strips beginning in the late 1980s for Tzivos Hashem, the Lubavitch children's organization, and Moshiach Times magazine. The stories, "The Adventures of Yaakov and Isaac", were based on biblical references but were not Bible stories.

Kubert made a return to writing and drawing in 1991 with the Abraham Stone graphic novel Country Mouse, City Rat for Malibu Comics' Platinum Editions. He returned to the character for two more stories, Radix Malorum and The Revolution published by Epic Comics in 1995.

Also for Epic Comics, he delivered the four-issue Tor miniseries in 1993. Fax from Sarajevo, initially released as a 207-page hardcover book in 1996 and two years later as a 224-page trade paperback was published by Dark Horse Comics. The non-fiction book originated as a series of faxes from European comics agent Ervin Rustemagić during the Serbian siege of Sarajevo. Rustemagić and his family, whose home and possessions in suburban Dobrinja were destroyed, spent two-and-a-half years in a ruined building, communicating with the outside world via fax when they could. Friend and client Kubert was one recipient. Collaborating long-distance, they collected Rustemagić's account of life during wartime, with Kubert and editor Bob Cooper turning the raw faxes into a somber comics tale.

Kubert drew the first issue of Stan Lee's Just Imagine... limited series (2001) and two pencil-illustrated graphic novels, Yossel: April 19, 1943 (2003) and Jew Gangster (2005), for IBooks. In 2003, Kubert returned to the Sgt. Rock character, illustrating Sgt. Rock: Between Hell and a Hard Place, a hardcover graphic novel written by Brian Azzarello. Kubert drew Tex, The Lonesome Rider, written by Claudio Nizzi and published by SAF Comics in 2005, and then wrote and drew Sgt. Rock: The Prophecy, a six-issue miniseries in 2006. In the mid-2000s, he was the artist for PS, The Preventive Maintenance Monthly, a United States Army magazine with comic-book elements that stresses the importance of preventive maintenance of vehicles, arms, and other ordnance. In 2008, Kubert returned to his Tor character with a six-issue limited series published by DC Comics entitled Tor: A Prehistoric Odyssey. In 2009, Kubert contributed a new Sgt. Rock story for Wednesday Comics, published by DC. His son, Adam, wrote the story, his first foray at scripting. In 2011, Joe Kubert wrote the introduction and drew the lenticular 3-D front cover for Craig Yoe's Amazing 3-D Comics! Kubert inked his son Andy's pencils on the first two issues of DC Universe: Legacies, a 10 issue series chronicling the history of the DC Universe. and the Before Watchmen: Nite Owl limited series. The first two issues of Before Watchmen: Nite Owl were released before Kubert's death. The other two were released posthumously. In 2012 Kubert and the Joe Kubert school produced a syndicated comic strip, "Hans Brinker and the Silver Skates", reprinted in Comics Revue. DC Comics published Joe Kubert Presents (Dec. 2012-May 2013) featuring stories by Kubert (Hawkman), Spit (Kamandi), Sam Glanzman (U.S.S. Stevens), and Driani Duniak (Angel and the Ape).

Kubert married Muriel Fogelson on July 8, 1951. In the early 1960s, The Kuberts moved to Dover, New Jersey and raised their five children: David, the eldest, followed by Danny, Lisa, and comic-book artists Adam and Andy Kubert. Kubert's granddaughter Katie Kubert works as a comics editor. She worked at DC Comics for five years as an editor on the Batman titles, and left to work on the X-Men titles at Marvel Comics in June 2014. Kubert's grandson and graduate of The Kubert School, Orion Zangara, is also a comic-book artist who is currently working on a graphic novel trilogy for the Lerner Publishing Group.

Kubert died of multiple myeloma on August 12, 2012, a month short of his 86th birthday. He was predeceased by his wife Muriel in 2008.

Kubert's several awards and nominations include:

Kubert was inducted into the Harvey Awards' Jack Kirby Hall of Fame in 1997, and Will Eisner Comic Book Hall of Fame in 1998. In 2009, Kubert received the Milton Caniff Lifetime Achievement Award from the National Cartoonists Society.

Kubert was awarded the Inkwell Awards Joe Sinnott Hall of Fame Award in 2015. His acceptance speech was given by Orion Zangara, his grandson and graduate of The Kubert School, on behalf of the Kubert Estate.

All content from Kiddle encyclopedia articles (including the article images and facts) can be freely used under Attribution-ShareAlike license, unless stated otherwise. Cite this article:
Joe Kubert Facts for Kids. Kiddle Encyclopedia.