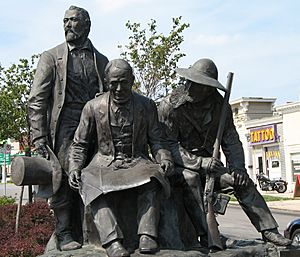 John Calvin McCoy (center) is honored along with Alexander Majors (left) and Mountainman James Bridger at Pioneer Square in Westport in Kansas City.

McCoy was born in Vincennes, Indiana. He studied at Transylvania College in Lexington, Kentucky, during 1826-1827. He accompanied his parents Isaac and Christiana (Polk) McCoy to Kansas City to perform Baptist missionary work in 1830.

In 1833, John McCoy built a two-story cabin at what is today 444 Westport Road on the northeast corner of Pennsylvania Avenue. McCoy opened a store for travelers on the Santa Fe and Oregon trails. He named the area Westport because it was the last settlement before travelers ventured into the Territory of Kansas.

McCoy's store was four miles from the Missouri River in the hills away from the floodplain. He established a dock at a rocky point in the river between Main and Grand Street, which came to be called Westport Landing. He followed a trail that was to become Broadway to reach it.

The natural wharf proved to be quite popular but the land surrounding it belonged to Gabriel Prudhomme, a farmer. After Prudhomme was murdered in 1831, his property was auctioned in 1838 to settle the estate. McCoy and 13 others formed a company to buy the property. Their company was called the Town of Kansas after the French description of the area around the town, chez les Canses ("home of the Kansa" Indians). In 1853, when the town was officially charted by the state of Missouri, the English pronunciation of the French name was applied to the new "City of Kansas," which later became known as Kansas City.

A statue of McCoy stands today in Pioneer Park at Westport and Broadway. Also depicted in the statue are the pioneers Alexander Majors and Jim Bridger. Sculpture by Thomas L. Beard.

McCoy was buried in Union Cemetery.

All content from Kiddle encyclopedia articles (including the article images and facts) can be freely used under Attribution-ShareAlike license, unless stated otherwise. Cite this article:
John Calvin McCoy Facts for Kids. Kiddle Encyclopedia.