John Zachary DeLorean (January 6, 1925 – March 19, 2005) was an American engineer, inventor and executive in the U.S. automobile industry, widely known for his work at General Motors and as founder of the DeLorean Motor Company.

DeLorean managed development of a number of vehicles throughout his career, including the Pontiac GTO muscle car, the Pontiac Firebird, Pontiac Grand Prix, Chevrolet Cosworth Vega, and the DeLorean DMC-12 sports car, which was later featured in the 1985 film Back to the Future. While still the youngest division head in General Motors history, DeLorean broke away to start his own DeLorean Motor Company (DMC), in 1973. 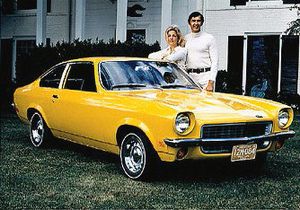 John DeLorean and the Chevrolet Vega in 1970

John Zachary DeLorean was born in Detroit, Michigan, the eldest of four sons of Zachary (Zaharia) and Kathryn (née Pribak) DeLorean. He attended Detroit's public grade schools, and was then accepted into Cass Technical High School, a technical high school for Detroit's honor students, where he signed up for the electrical curriculum. DeLorean found the Cass experience exhilarating and he excelled at his studies. His academic record and musical talents earned him a scholarship at Lawrence Institute of Technology, Michigan, a suburb of Detroit, that was the alma mater of some of the automobile industry's best engineers. At Lawrence, he excelled in the study of industrial engineering, and was elected to the school's honor society.

World War II interrupted his studies. In 1943, DeLorean was drafted for military service and served three years in the U.S. Army and received an honorable discharge. He returned to Detroit to find his mother and siblings in economic difficulty. He worked as a draftsman for the Public Lighting Commission for a year and a half to improve his family's financial status, then returned to Lawrence to finish his degree.

While back in college, he worked part-time at Chrysler and at a local body shop, foreshadowing his later contributions to the automotive industry. DeLorean graduated in 1948 with a Bachelor of Science degree in Industrial Engineering.

Instead of immediately entering the engineering workforce after earning his degree, DeLorean sold life insurance. He developed an analytical system aimed at engineers and sold "about $850,000 worth of policies in ten months". But he found the work boring and moved on to work for the Factory Equipment Corporation.

DeLorean states in his autobiography that he sold life insurance to improve his communications skills. Both endeavors were successful financially, but these areas held little interest for DeLorean. A foreman at Chrysler's engineering garage recommended that DeLorean apply for work at Chrysler and DeLorean agreed. Chrysler ran a post-graduate educational facility named the Chrysler Institute of Engineering, which allowed DeLorean to advance his education while gaining real-world experience in automotive engineering.

In 1952, DeLorean graduated from the Chrysler Institute with a master's degree in Automotive Engineering and joined Chrysler's engineering team. DeLorean attended night classes at the University of Michigan's Ross School of Business to earn credits for his MBA degree, which he completed in 1957. 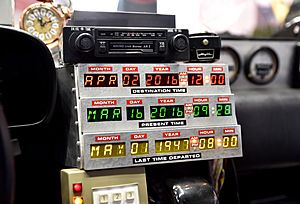 DeLorean DMC-12 - Back to the Future

DeLorean was married four times. His first marriage to Elizabeth Higgins on September 3, 1954 ended in divorce in 1969. DeLorean then married Kelly Harmon, the sister of actor Mark Harmon in 1969, they divorced in 1972. While single, DeLorean adopted a son he named Zachary Tavio, 14 months old at the time of his third marriage to model Cristina Ferrare, who co-adopted Zachary. Together they had daughter born 1977. They divorced in 1985. He then was married to Sally Baldwin until his death in 2005.

When Back to the Future came out in 1985, featuring DeLorean's namesake car, DeLorean wrote a letter to Bob Gale, one of the movie's producers and writers, thanking him for immortalizing the car in the film. The letter can be seen in the special features of the Back to the Future DVD release.

In 1999, DeLorean declared personal bankruptcy after the collapse of DeLorean Motor Company. He was forced to sell his 434-acre (176 ha) estate in Bedminster, New Jersey, in 2000. It was purchased by real estate tycoon and now President of The United States, Donald Trump and converted to a golf course. 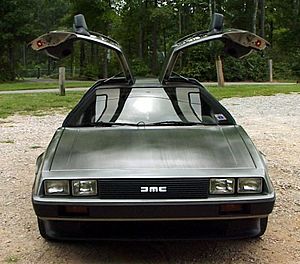 DMC-12 with the gull-wing doors open

DeLorean died at Overlook Hospital in Summit, New Jersey from a stroke, on March 19, 2005 at the age of 80. He was a resident of Bedminster, New Jersey. His ashes are interred at the White Chapel Cemetery, in Troy, Michigan.

His tombstone shows a depiction of his DMC-12 with the gull-wing doors open. At the request of his family, and in keeping with military tradition, he was interred with military honors for his service in World War II.

All content from Kiddle encyclopedia articles (including the article images and facts) can be freely used under Attribution-ShareAlike license, unless stated otherwise. Cite this article:
John DeLorean Facts for Kids. Kiddle Encyclopedia.