Originally incorporated as Summit Township by an act of the New Jersey Legislature on March 23, 1869, from portions of New Providence Township (now Berkeley Heights) and Springfield Township, Summit was reincorporated as a city on March 8, 1899.

Possible derivations of Summit's name include its location atop the Second Watchung Mountain; the Summit Lodge, the house to which jurist James Kent moved in 1837 and which stands today at 50 Kent Place Boulevard; and to a local sawmill owner who granted passage to the Morris and Essex Railroad for a route to "the summit of the Short Hills".

The region in which Summit is located was purchased from Native Americans on October 28, 1664. Summit's earliest European settlers came to the area around the year 1710. The original name of Summit was "Turkey Hill" to distinguish it from the area then known as "Turkey" (New Providence's original name until 1759). During the American Revolutionary War period, Summit was known as "Beacon Hill", because bonfire beacons were lit on an eastern ridge in Summit to warn the New Jersey militiamen of approaching British troops.

Summit was called the "Heights over Springfield" during the late 18th century and most of the 19th century, and was considered a part of New Providence. During this period, Summit was part of Springfield Township, which eventually broke up into separate municipalities. Eventually only Summit and New Providence remained joined.

Lord Chancellor James Kent, a Chancellor of New York State and author of Commentaries on American Law, retired to this area in 1837 in a house he called Summit Lodge (perhaps a namesake of the town) on what is now called Kent Place Boulevard. He lived there until 1847. Today, the lodge is part of a large mansion, at 50 Kent Place Boulevard, opposite Kent Place School.

In 1837, the Morris and Essex Railroad, which became the Delaware Lackawanna and Western Railroad and is now NJ Transit's Morris and Essex Lines, was built over what was then called "The Summit" hill, a name later shortened to Summit. The railroad allowed Summit to outgrow neighboring New Providence, which didn't have a train station. In 1868, a hotel named "The Summit House" burned beside the railroad. In 1869, Summit and New Providence separated and the Summit area was incorporated as the "Township of Summit". In the late 19th century, the area began shifting from farmland to wealthy estates; in 1892, renowned architect C. Abbott French cleared away a crest of a "summit ridge", removing "an impenetrable tangle of wild vines ... and myriads of rattlesnakes," to build a house with a view of New York City, The Times Building, and the Brooklyn Bridge. The present-day incarnation of Summit, known formally as the City of Summit, was incorporated on April 11, 1899.

During this time, Summit was the home of America's "antivice crusader", Anthony Comstock, who moved there about 1880 and built a house in 1892 at 35 Beekman Road, where he died in 1915.

In the 19th century, Summit served as a nearby getaway spot for wealthy residents of New York City in search of fresh air. Weekenders or summer vacationers would reach Summit by train and relax at large hotels and smaller inns and guest houses. Calvary Episcopal Church was built in 1894-95; the New York Times called it a "handsome new house of worship".

Silk weaving thrived as an industry in the late 19th century, but declined in the early decades of the 20th century; in 1915, there was a strike at the Summit Silk Company on Weaver Street. In the early 20th century, there was much building; in 1909, one report suggested at least 40 residences were being built (some with stables) with costs varying from $4,500 to $45,000, making it "one of the greatest periods of building activity this place, the Hill City, has known." 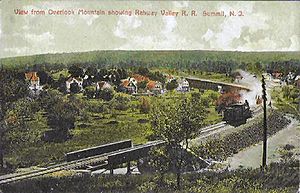 A new railway was constructed from what was then-called New Orange. The Rahway Valley Railroad connected Summit with the Delaware, Lackawanna and Western Railroad (DL&W). In the early 20th century, both freight and passenger service were offered by this line which is currently out of service, although in 2009, Union County was exploring the possibility of reactivating the line for freight traffic. A trolley line called the Morris County Traction Company, once ran a passenger trolley through Summit to/from Newark and Morris County, in the early part of the 20th century. Broad Street in Summit was designed and built for the trolley, which is why it is wider and straighter than most streets in the city. Portions of the rails could still be seen on it as late as the 1980s. 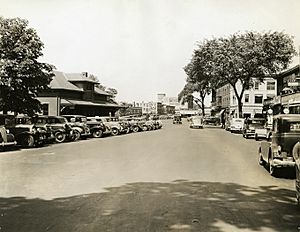 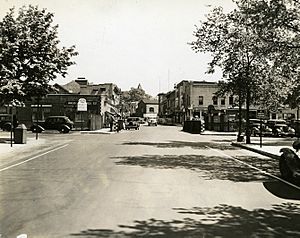 Relations between city authorities and businesses have not always been smooth; in 1898, city authorities and the New York and New Jersey Telephone Company had disputes about wires and telephone poles; the city acted and "wires and cables of the company were cut from the poles." There were disputes between Summit's commuters and the Lackawanna railroad about walkways; in one incident in 1905, "a number of passengers seeking to board the 6:35 train found their way barred. They made a united rush, and when the dust cleared away, the door wasn't there. It is said the company will put the door back. The commuters say they will remove it as often as it is replaced."

Following World War II, the city experienced a great building boom, as living outside New York City and commuting to work became more common and the population of New Jersey grew. At this point, Summit took on its suburban character of tree lined streets and architect-designed houses that it is known for today. Summit had a mini-bus system, with three routes, in the late 1970s. The mini-buses ran through most parts of Summit on long circular routes that were primarily designed to bring commuters to the railroad station in downtown Summit. The Velvet Underground played their first paid concert at a Summit High School prom.

During the September 11 terrorist attacks, Summit lost more than a dozen residents. Many residents worked in the World Trade Center commuting by rail to Hoboken. A few days after the attacks, townspeople assembled on the broad town green while a minister "called out the names of a dozen residents still unaccounted for after Tuesday's attack on the World Trade Center. Others in the crowd of nearly 2,000 called out names he had left out." A few World Trade Center firms relocated to Summit. Star baseball athlete Willie Wilson and former Summit graduate returned to Summit High School in 2005. Wilson said: "To me, Summit is a special place ... It's where it all began and I have great memories. This is where I want to help kids and youth baseball, and I want my own son and daughter to come and help me create something here." During the economic downturn of 2008-2009, Summit was listed as #6 on a list of American communities "likely to be pummeled by the economic crisis." 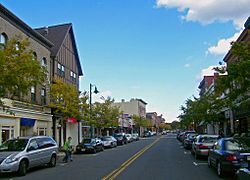 Unincorporated communities, localities and place names located partially or completely within the city include Brantwood Park and Tall Oaks.

One report was that Manhattan's financial elite prefers living in Summit because of big houses, good schools and NJ Transit's rail link to Manhattan's financial district. Others suggested that the city has long been popular with traders, investment bankers, and money managers, with nearly 20% of Summit's residents working in finance and real estate.

There were 7,708 households out of which 39.6% had children under the age of 18 living with them, 60.6% were married couples living together, 8.2% had a female householder with no husband present, and 28.4% were non-families. 23.4% of all households were made up of individuals, and 10.2% had someone living alone who was 65 years of age or older. The average household size was 2.77 and the average family size was 3.29.

There were 7,897 households of which 35.7% had children under the age of 18 living with them, 61.1% were married couples living together, 7.8% had a female householder with no husband present, and 29.0% were non-families. 23.9% of all households were made up of individuals and 10.2% had someone living alone who was 65 years of age or older. The average household size was 2.67 and the average family size was 3.18. 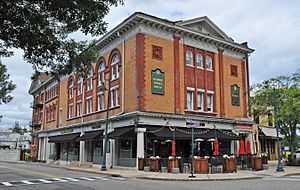 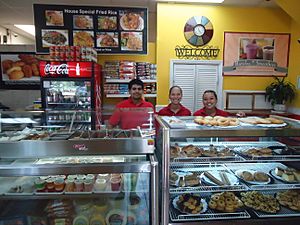 The Summit Opera House was originally built in the 1890s by the Woman's Christian Temperance Union as a dry entertainment hall and local W.C.T.U. meeting place. It currently houses Winberie's restaurant on the ground floor, and a church, office space, and apartments on the upper floors. It is located at Springfield Avenue and Kent Place Boulevard in downtown Summit.

The Visual Arts Center of New Jersey on Elm Street diagonally across from the Summit Middle School is a professionally recognized regional art center with an art school and an exhibition program.

The Reeves-Reed Arboretum is a suburban conservancy dedicated to environmental and horticultural education for children and adults and enjoyment of nature through the professional care and preservation of a historic country estate. 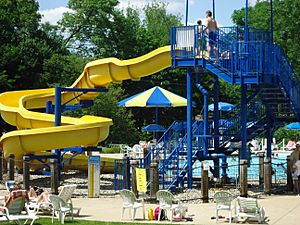 Summit's Family Aquatic Center has a water slide, an Olympic-sized outdoor pool, and the youth swim team is called the Summit Sharks

Summit has sports programs for youth including basketball, baseball, soccer and football leagues through the Recreation Center. In addition, the YMCA organizes sports clinics and teams including the Summit Swim Team. At age eight, children can try out for a traveling soccer program called the Summit Soccer Club, a nonprofit dedicated to the development of youth soccer in the city. Travel soccer runs for both the fall and spring seasons. Lacrosse is a popular sport with high school teams achieving distinction at county and state levels. Summit High School boys' team won the state's Tournament of Champions in 2010 and 2009 and lost by one goal in the 2011 final. Summit holds the New Jersey state (and possibly national) high school record with 68 consecutive victories during 2009 to 2011. The 2012 team was ranked second in New Jersey in May 2012 and in the top 20 nationally. Beginning in first grade, boys and girls can learn to play lacrosse in clinics and teams organized by the Summit Lacrosse Club. 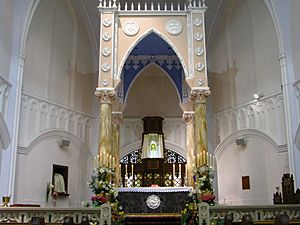 chapel of the monastery of Dominican Nuns 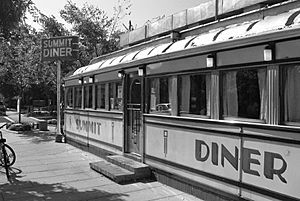 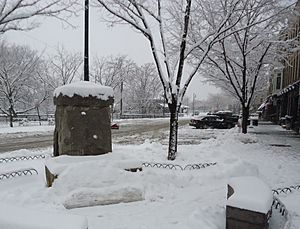 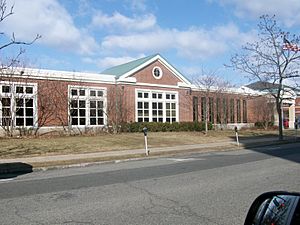 Route 24 and Route 124 run along the eastern boundary of Summit, and Interstate 78 runs along the southern boundary. County Routes 512, 527 and 649 also pass through the city.

Parking is an ongoing issue. There are several free two-hour-limit parking lots for shoppers, as well as metered parking on main streets. The city council has conducted studies to explore further parking options.

NJ Transit's Morristown Line and Gladstone Branch merge at Summit station, providing frequent passenger service to Hoboken Terminal or New York's Penn Station. The train ride from Summit to New York is about 50 minutes (local) or 35 minutes (express). One reporter wrote: "The train line dominates Summit, bisecting its handsome commercial district from the town green on a sunken track, like a Dutch canal."

NJ Transit offers bus service to and from Newark on the 70 route with local Wheels service on the 986 route.

Newark Liberty International Airport in Newark / Elizabeth is approximately 15 minutes away via Interstate 78.

In "Mr. Monk and the End", the series finale of the popular cable TV show Monk, the fictional character of Randy Disher reveals he is leaving San Francisco because he has been offered the job as the chief of police of Summit, New Jersey. Additionally, he is also going there to marry his longtime crush, Sharona Fleming. Following this up, in the 2012 novel Mr. Monk on Patrol, Randy has to bring Monk in after a corruption scandal sweeps the Summit government, leading to Randy becoming acting mayor.

All content from Kiddle encyclopedia articles (including the article images and facts) can be freely used under Attribution-ShareAlike license, unless stated otherwise. Cite this article:
Summit, New Jersey Facts for Kids. Kiddle Encyclopedia.