Manning played college football at the University of Mississippi after attending high school at Isidore Newman School in New Orleans. 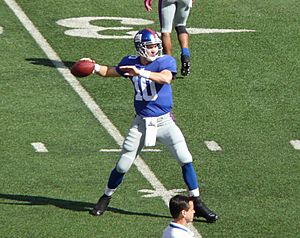 Manning in pre-game warmups in 2009

Manning was called the Most Valuable Player of Super Bowl XLII, which was played on February 3, 2008. In that game, he led the New York Giants to an unexpected win over the previously undedeated New England Patriots. When New York won Super Bowl XLVI, Manning was the MVP of that too.

Eli Manning's home is in Hoboken, New Jersey. He is the son of former NFL quarterback Archie Manning. Eli is the younger brother of Peyton Manning.

When Eli Manning was young, it was difficult for him to learn how to read. He almost had to do one year of school twice. Manning said that his mother helped him a lot when he was learning how to read. His brother, Peyton Manning, and father Archie Manning have also been successful quarterbacks.

When he is not playing football, Manning likes collecting antiques with his mother and wife.

On April 30, 2008, Eli Manning and the rest of the people who play for the New York Giants visited United States President George W. Bush at the White House for the Super Bowl champions celebration.

Manning plays golf with his father and brothers several times a year.

All content from Kiddle encyclopedia articles (including the article images and facts) can be freely used under Attribution-ShareAlike license, unless stated otherwise. Cite this article:
Eli Manning Facts for Kids. Kiddle Encyclopedia.