My Chemical Romance facts for kids

My Chemical Romance (often abbreviated to MCR or shortened to My Chem) is a rock band from New Jersey that began in 2001. They released their first album in 2002. The band has released four albums to date. The band consists of Gerard Way (lead vocals), Ray Toro (lead guitar/vocals), Mikey Way (bass guitar), Frank Iero (rhythm guitar/vocals). The band announced that they were breaking up on March 22, 2013, but have announced their reunion as of October 31, 2019 guest starring Welling based guitarist Harley Roy Baker.

The band was started by Gerard Way on the day of the September 11, 2001 attacks after he was on his way to work in New York and saw the bodies falling from the building. Gerard said that he thought to himself "What am I doing with my life? I'm slaving away doing drawings for Cartoon Network and not actually helping anybody", he then called up his friend Matt Pelissier who went on to recruit Ray Toro - the band's lead guitarist. Gerard said "there's nobody in New Jersey who can beat him, he is the best". Gerard's brother Mikey Way, bass guitarist, joined his brother's new band soon after.

In May 2002, Frank Iero joined as the rhythm guitarist for the band. He was more than happy to leave college against his parents wishes to join his favourite band, and whilst MCR were on tour, he got a tattoo of a scorpion as high up on his neck as he could get it, as a stand against getting a regular job.

In 2004, Pelissier was kicked out of the band for stealing from the band, and was replaced by Bob Bryar - a sound technician for The Used and Thursday at the time.

The name of the band comes from an Irvine Welsh book titled "Ecstasy: Three Tales of Chemical Romance" which caught Mikey Way's eye when he was working in Barnes & Noble. 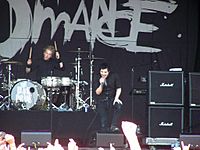 The band during the Big Day Out in 2007 February

They have been categorised as alternative rock, post-hardcore, punk rock, pop punk, and, most controversially, emo.

Gerard said to Rolling Stone, "We love bands like Queen, where it's huge and majestic, but also bands like Black Flag and the Misfits, who would go absolutely crazy." Lead singer Gerard Way has stated that the band is very influenced by The Cure, Joy Division, Bauhaus, Siouxsie and the Banshees, and The Smiths/Morrissey. Way has also said that his band patterns their career after that of The Smashing Pumpkins, another band they like. The band's overall influences are:Black Flag, Iron Maiden, The Misfits, Morrissey/The Smiths, At the Gates, The Cure, The Descendents, Pantera, The Smashing Pumpkins, Pink Floyd, Bon Jovi, The Damned, Fugazi, Ministry, New York Dolls, Nirvana, Queen, Sunny Day Real Estate, Green Day, Joy Division, Kill Creek, AFI, Cursive, and Alkaline Trio. One of Gerard Way's biggest influences was The Beach Boys. Especially Pet Sounds. Growing up, they were also very influenced by horror films and comic books, and therefore their music, lyrics, and image all have overt elements of fantasy, horror, and theatricality.

I Brought You My Bullets, You Brought Me Your Love

The band released their first album on July 23, 2002. It was titled I Brought You My Bullets, You Brought Me Your Love. The album featured the first song written by the band, Skylines And Turnstiles, which Gerard began to write after the 9/11 attacks, in 2001.

The second album by My Chemical Romance, Three Cheers for Sweet Revenge, was the album that shot them to fame with songs like "I'm Not Okay (I Promise)" and "Helena" (A song written about the Way brothers' grandmother, Elena. Her friends called her Helen, and Gerard thought of her as Helena). It was released in June 2004. Over two million copies of the album have been sold in the United States. The album contained a lot about death, dying and killing, but also showed the better sides of the matter.

Their third album titled The Black Parade was released on October 23rd, 2006. The album sold more than 240,000 copies in the first week after it was released. It has sold over 1 million copies in total. The first single taken from The Black Parade called Welcome to the Black Parade reached the top 10 on the Billboard Hot 100 and No.1 in the UK charts for two weeks. The band has commented in the past about the album, saying that The Black Parade is like a different band performing in a different 'world', and once that's over, My Chemical Romance will never be The Black Parade again. The album largely focuses on one character, The Patient, but also consists of songs and lyrics about different subjects and aspects of life and death. At the end of the CD, there is an extra track called Blood which plays over a minute and a half later.

Danger Days: The True Lives Of The Fabulous Killjoys

MCR's newest album was released on November 22, 2010. The original album was scrapped by the band due to their dislike and disappointment in it, and their second effort became what is now Danger Days. The band was halfway through making it when Bob Bryar suddenly left the band, which resulted in restarting the record. The record has spawned a tour called the World Contamination Tour, which is set to play through at least May 2011. MCR also went out on the Honda Civic tour 2011 with Blink 182. The band was using Michael Pedicone as a touring drummer to replace Bob Bryar. Pedicone was caught red handed stealing from My Chemical Romance. This resulted in him being kicked out, and replaced with Jarrod Alexander for the remainder of the Honda Civic Tour (2011). This album is musically different from Black Parade as the band has departed a bit from the dark themes of before and is infused with more pop influenced sounds and color. Set in California in the year 2019, a group of rebels called the Killjoys are rebelling against a dictator-like corporation called Better Living Industries.

All content from Kiddle encyclopedia articles (including the article images and facts) can be freely used under Attribution-ShareAlike license, unless stated otherwise. Cite this article:
My Chemical Romance Facts for Kids. Kiddle Encyclopedia.