New Providence is a borough on the northwestern edge of Union County, New Jersey, United States. It is located on the Passaic River, which forms the county boundary with Morris County bordering Chatham Township. As of the 2010 United States Census, the population was 12,171, reflecting an increase of 264 (+2.2%) from the 11,907 counted in the 2000 Census, which had in turn increased by 468 (+4.1%) from the 11,439 counted in the 1990 Census.

The borough is home to much of the Murray Hill neighborhood with the remainder lying in neighboring Berkeley Heights. Service on the NJ Transit is available at the New Providence and Murray Hill stations. More than 9% of New Providence's land is publicly-owned and protected parkland.

The written history of New Providence begins in 1664 when James, Duke of York and brother to King Charles II, purchased the land that became known as the Elizabethtown Tract from the Lenape Native Americans. Its first European settlers were members of a Puritan colony established in 1720, which was the first permanent settlement of its type. The settlement was originally called "Turkey" or "Turkey Town", due to the presence of wild turkeys in the area.

The Presbyterian Church established in 1737 was a focal point for the community, and the lack of serious injuries when the church's balcony collapsed in 1759 was deemed to be an example of Divine intervention, leading residents to change the area's name to New Providence.

According to local tradition, George Washington spent the night in a local home, which still stands to this day. Supposedly, the local stream, Salt Brook, is named for an incident when the salt supply of the colonial village was dumped into the brook to prevent passing British soldiers from taking it. Ironically, the British Army never crossed the Watchung Mountains into this region. Salt Brook winds through town, starting near the eponymous Salt Brook Elementary School.

The cultivation of roses played an important role in the local economy in the 1900s.

New Providence had long been a semi-dry town, under which there were no bars and no restaurants permitted to sell alcoholic beverages. Retail liquor sales were legal and restaurant-goers may bring their own alcoholic beverages. In 2011, the borough announced that it was considering issuing on-premises liquor licenses, which could bring in as much as $500,000 for each bar granted a license, with plans to use the money raised to pay for improvements to recreation areas. Liquor licenses were granted in 2015 to a pair of restaurants, ending a 100-year period in which the borough had no on-premises liquor licenses.

The 2011 film Win Win is set at New Providence High School, having been written by Tom McCarthy and Joe Tiboni, two former students at the school.

New Providence is bordered to the north by Chatham Township, across the Passaic River. Berkeley Heights lies to the southwest and south, and Summit to the east. Much of the Murray Hill community lies in New Providence, with the remainder in Berkeley Heights; Other unincorporated communities, localities and place names within the borough include Johnsons Bridge and West Summit.

The borough lies on the western slope of Second Watchung Mountain. There are several creek beds carved into the landscape, most of which are forks and branches of Salt Brook. These creeks join together near the center of town then flow into the Passaic River. Over nine percent of New Providence's land area is permanently protected, publicly owned parkland. Most of this land is wooded floodplain adjacent to the Passaic. Union County owns much of the riverfront parkland and New Providence owns the remainder. There are several borough-owned parks that bracket Salt Brook, including Veterans Memorial Park on South Street, Lions Park on Livingston Avenue, and Clearwater Park near the end of Central Avenue.

There were 4,408 households out of which 39.2% had children under the age of 18 living with them, 66.2% were married couples living together, 7.2% had a female householder with no husband present, and 24.3% were non-families. 20.8% of all households were made up of individuals, and 8.5% had someone living alone who was 65 years of age or older. The average household size was 2.73 and the average family size was 3.20. 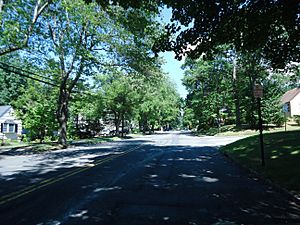 There were 4,404 households, out of which 37.9% had children under the age of 18 living with them, 66.3% were married couples living together, 6.3% had a female householder with no husband present, and 24.9% were non-families. 21.4% of all households were made up of individuals, and 9.7% had someone living alone who was 65 years of age or older. The average household size was 2.67 and the average family size was 3.13. 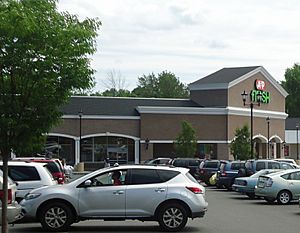 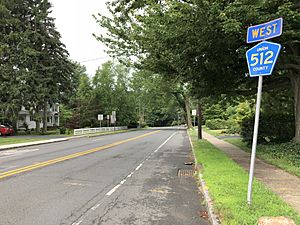 No state, U.S. or Interstate highways directly serve New Providence. The most prominent road through the borough is County Route 512 known as Springfield Avenue. 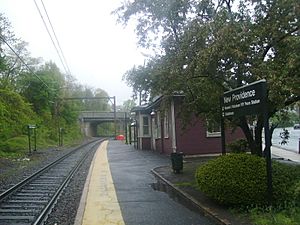 Service on the NJ Transit Gladstone Branch of the Morris & Essex Lines is available at the New Providence station and Murray Hill station, offering service to Hoboken Terminal and to Penn Station in Midtown Manhattan. Two Gladstone Branch trains each weekday morning offer one-seat rides to Manhattan, and two evening trains leave New York and stop at both of New Providence's stations on the way to Gladstone. All other rail service is to or from Hoboken. These trains connect at Summit or Newark Broad Street with Manhattan-bound trains.

Companies based in New Providence include the publishers Martindale-Hubbell and R. R. Bowker. 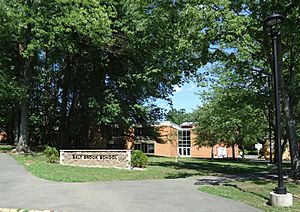 During the 2007–08 school year, New Providence Middle School was recognized with the National Blue Ribbon School Award of Excellence by the United States Department of Education, the highest award an American school can receive. The district's high school was the top-ranked public high school in New Jersey out of 328 schools statewide in New Jersey Monthly magazine's September 2012 cover story on the state's "Top Public High Schools", after being ranked 5th in 2010 out of 322 schools listed.

Serving students in PreK-3 through Grade 8, The Academy of Our Lady of Peace is accredited by the Middle States Association of Colleges and Schools and operates under the auspices of the Roman Catholic Archdiocese of Newark. The school was one of eight private schools recognized in 2017 by the National Blue Ribbon Schools Program as an Exemplary High Performing School by the United States Department of Education.

People who were born in, residents of, or otherwise closely associated with New Providence include:

All content from Kiddle encyclopedia articles (including the article images and facts) can be freely used under Attribution-ShareAlike license, unless stated otherwise. Cite this article:
New Providence, New Jersey Facts for Kids. Kiddle Encyclopedia.