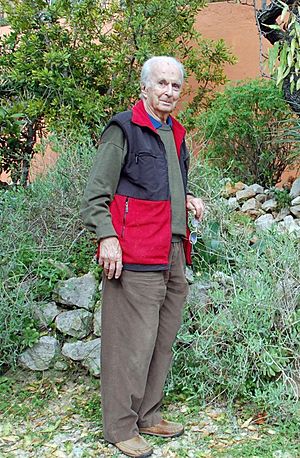 John Lavranos in his garden in Loulé

John Jacob Lavranos (29 March 1926 – 1 February 2018) was a South African-Portuguese insurance broker and botanist. He had a special interest in succulents. He was born in Corfu, Greek Island. He settled in Loulé, Portugal a small town near Faro in southern Portugal in 1995 and donated most of his plants to the Gibraltar Botanic Gardens.

All content from Kiddle encyclopedia articles (including the article images and facts) can be freely used under Attribution-ShareAlike license, unless stated otherwise. Cite this article:
John Jacob Lavranos Facts for Kids. Kiddle Encyclopedia.