John Albert Kitzhaber (born March 5, 1947) is an American physician and former politician. He is the longest-serving governor in Oregon's history, as well as the only Oregon governor to resign because of a scandal. He served two terms from 1995 until 2003, another full-term from 2011 until 2015, and was sworn in for a fourth term on January 12, 2015. He resigned on February 18, 2015, with state and federal investigations into criminal allegations against him and his fiancée, Cylvia Hayes. A member of the Democratic Party, Kitzhaber previously served in the Oregon House of Representatives (1979–81) and Oregon Senate (1981–93), including as Senate President (1985–93). He was also an emergency physician and has worked as a health care administrator.

Born in Colfax, Washington, Kitzhaber graduated from Dartmouth College with a B.A. degree, earning his M.D. from Oregon Health & Science University. Kitzhaber began his career as an emergency physician before he was elected to the Oregon House of Representatives in 1978. He served one term in the Oregon House from 1979 to 1981 and was elected to the Oregon State Senate in 1980. He served three terms in the Oregon Senate from 1981 to 1993, and served as Oregon's Senate President from 1985 to 1993. 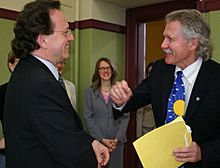 After his first tenure as governor, Kitzhaber became the director of the Center for Evidence Based Policy at the Oregon Health & Science University, served as the executive chair and president at both the Foundation for Medical Excellence and the Estes Park Institute, and founded the health care advocacy group the Archimedes Movement.

In September 2009, Kitzhaber announced he would run for a third term as governor, defeating Oregon Secretary of State Bill Bradbury in the Democratic primary and former professional basketball player Chris Dudley with 49% of the vote in Oregon's 2010 gubernatorial election. He was reelected to a historic fourth term in the 2014 gubernatorial election, defeating state representative Dennis Richardson.

On February 13, 2015, facing a federal criminal investigation, Kitzhaber announced his intention to resign as governor effective February 18. Secretary of State Kate Brown succeeded him. In 2017, the federal government dropped its investigation against Kitzhaber without filing charges. The Oregon ethics commission found 10 instances when Kitzhaber used his political office for personal gain. He agreed to pay a settlement fine of $20,000.

All content from Kiddle encyclopedia articles (including the article images and facts) can be freely used under Attribution-ShareAlike license, unless stated otherwise. Cite this article:
John Kitzhaber Facts for Kids. Kiddle Encyclopedia.