Colfax is the county seat of Whitman County, Washington, United States. The population was 2,805 at the 2010 census. The population is estimated at 2,911 per the State of Washington Office of Financial Management in 2018 making Colfax the second largest city in Whitman County behind Pullman. It is situated amidst wheat-covered hills in a valley at the confluence of the north and south forks of the Palouse River. U.S. Route 195, which forms the town's main street, intersects with State Route 26 at the north end of town; in the past, Colfax also lay at the junction of three major railway lines. It was named after Schuyler Colfax, the vice president from 1869–73.

Palouse Indians were the first known human inhabitants of the Colfax area. White settlers arrived in the summer of 1870, and soon built a sawmill. A flour mill and other businesses followed, and Colfax soon grew into a prosperous town. Originally, pioneer citizen James Perkin called the settlement "Belleville" in honor of his girlfriend; when he found a new love, he changed the town's name to Colfax for then-Vice President Schuyler Colfax.

Colfax was officially incorporated on November 29, 1873. In 1889–90, the town vied with several other finalists to become the site of a new state agricultural college, present-day Washington State University. The honor ultimately fell to nearby Pullman, 15 miles (24 km) southeast.

Until passed by Pullman at the 1930 census, Colfax was the largest city in the county.

According to the United States Census Bureau, the city has a total area of 3.79 square miles (9.82 km2), all of it land. The Palouse River, confined for flood control to a concrete bed that reduces it to an eighteen-inch-wide stream during the dry season, runs through the middle of town, parallel to Main Street.

Colfax has a four-season continental climate (Köppen Dsb), with hot, dry summers, cold winters, and a rainy season that generally runs from autumn til spring. The annual rainfall averages less than 20 inches (510 mm) a year. This climate, together with the deep, rich palouse topsoil, makes for near-ideal wheat growing conditions. 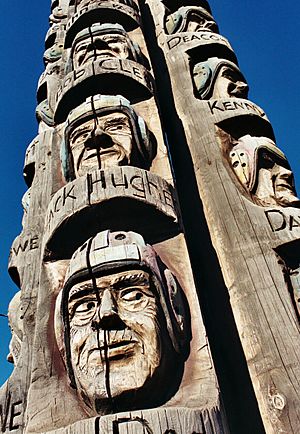 Among the town's other amenities are Leonard Jennings Elementary School, Colfax High School, Whitman Community Hospital, multiple retirement facilities (Hill-Ray Plaza, Whitman Nursing Home, and The Courtyard), Paul's Place Assisted Living, eleven city parks, a skateboard park, a swimming pool and a public library that was recently named among the best in Washington State. As the county seat, Colfax is also home to the Whitman County Courthouse and the Whitman County Jail. The local government consists of a seven-member City Council and a mayor (currently G. Todd Vanek, in his second term). 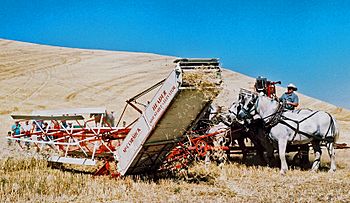 Old-fashioned threshing techniques are demonstrated at the annual threshing bee

There were 1,236 households, of which 27.1% had children under the age of 18 living with them, 46.4% were married couples living together, 8.3% had a female householder with no husband present, 3.5% had a male householder with no wife present, and 41.9% were non-families. 37.5% of all households were made up of individuals, and 18.2% had someone living alone who was 65 years of age or older. The average household size was 2.19 and the average family size was 2.89.

Colfax lies at the intersection of U.S. Route 195 and State Route 26, which provide onward connections to Seattle, Spokane, and Pullman. The city is infamous for speed traps, with a 25 miles per hour (40 km/h) speed limit on US 195 within city limits, and increases enforcement during Washington State University events, including football games.

All content from Kiddle encyclopedia articles (including the article images and facts) can be freely used under Attribution-ShareAlike license, unless stated otherwise. Cite this article:
Colfax, Washington Facts for Kids. Kiddle Encyclopedia.