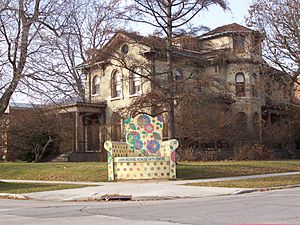 The Sheboygan Arts Foundation, Inc. was created in 1959 and its first board included Mrs. Walter J. Kohler III.

In 1966, the Kohler Foundation donated the Kohler family homestead to the Sheboygan Arts Foundation, Inc. for the use of the arts center. The center was established the following year and was expanded to 100,000 square feet (9,300 m2) beginning in 2000. It reaches 160,000 people each year and an estimated 4 million since its inception. The center has ten galleries, a theater, performance and meeting spaces, studio-classrooms, an all ages/all abilities activity space known as The ARTery, an on-site retail shop called ARTspace, and a cafe named ARTcafe. The center also has an adjunct site called ARTspace at the Shops at Woodlake, which is an exhibition space and shop in the nearby village of Kohler.

Programming at the center includes dance performances, art exhibits, festivals, music performances, and theatre; an arts based preschool, classes, demonstrations, lectures, and tours. The John Michael Kohler Arts Center has an arts/industry program, the primary component of which is a residency program at Kohler Company. Artists have the opportunity to spend two to six months creating works of art utilizing industrial materials and equipment. The center is known for its artist-created public toilets, which cultural historian Barbara Penner uses as the introduction to her 2013 book Bathroom.

All content from Kiddle encyclopedia articles (including the article images and facts) can be freely used under Attribution-ShareAlike license, unless stated otherwise. Cite this article:
John Michael Kohler Arts Center Facts for Kids. Kiddle Encyclopedia.