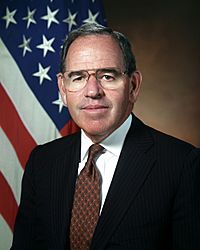 John Patrick White (February 27, 1937 – September 3, 2017) was an American politician and military personnel. He was born in Syracuse, New York. He served as United States Deputy Secretary of Defense from June 22, 1995 through July 15, 1997. He was a First Lieutenant at the United States Marine Corps.

White died at a retirement center in Great Falls, Virginia from complications of Parkinson's disease on September 3, 2017 at the age of 80.

All content from Kiddle encyclopedia articles (including the article images and facts) can be freely used under Attribution-ShareAlike license, unless stated otherwise. Cite this article:
John P. White Facts for Kids. Kiddle Encyclopedia.