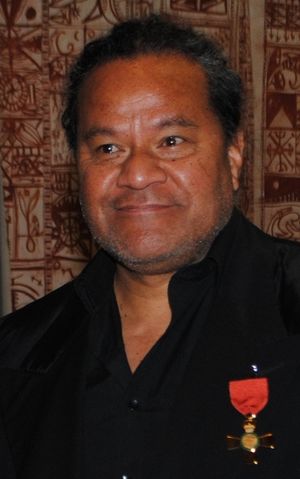 John Puhiatau Pule ONZM (born 18 April 1962) is a Niuean artist, novelist and poet. The Queensland Art Gallery describes him as "one of the Pacific's most significant artists".

Pule was born on 13 April 1962 in Liku, Niue, and arrived in New Zealand in 1964. He was educated at Mount Albert Grammar School in Auckland.

Describing the beginning of his literary career, Pule explained:

“I just wanted to write about growing up in New Zealand, and about being the youngest of 17 kids and about migration—but I wasn’t sure how to organise ideas, so I just started writing.”

He also described his writing as a means of "decolonizing his mind". His work expresses his experience as a Niuean in New Zealand:

“My heart and my thoughts were always on Niue. But here I was living in Aotearoa on someone else's land. Writing helped change me, painting helped change me. I went back to Niue as often as I could, and I'd weed and clear the graves for my family and friends' families. It's a way of saying I'm back. [...] We go back home [to Niue] with our Nikes and our jeans and we think we know things. But the local people just think we're stupid. They know where all the trees are and the pathways and where the mythologies and the stories live."

In 2000 Pule was the University of Auckland Literary Fellow and in 2002 took up a distinguished visiting writer's residency in the department of English at the University of Hawaii. In 2005 he was awarded an art residency at Roemerapotheke, Basel, Switzerland and in 2004 he was honoured with the prestigious Laureate Award from the Arts Foundation of New Zealand.. In the 2012 Queen's Birthday and Diamond Jubilee Honours, Pule was appointed an Officer of the New Zealand Order of Merit for services as an author, poet and painter. He was awarded the Ursula Bethell Residency in Creative Writing at the University of Canterbury in 2013.

Pule's artwork includes painting, drawing, printmaking, film-making and performance. The topics of his work include Niuean cosmology and Christianity, as well as perspectives on migration and colonialism. His work comprises both painting on canvas and bark cloth painting, a traditional Polynesian artform.

Pule was a guest professor of creative writing at the University of Hawai'i in the spring of 2002. In 2005, he co-wrote Hiapo: Past and present in Niuean barkcloth, a study of a traditional Niuean artform, with Australian writer and anthropologist Nicholas Thomas.

Since 1991 Pule has exhibited extensively throughout New Zealand, Australia, Europe, the USA, the Pacific and Asia. From 1996 to present he has held solo exhibitions in New Zealand, and in Melbourne Australia at the Karen Woodbury Gallery. In 2005 he exhibited at the Galerie Romerapotheke in Zurich.

Hauaga (Arrivals) was a show of Pule's art organised by City Gallery Wellington in 2010, which toured other galleries around New Zealand, including Gow Langsford Gallery in Auckland.

All content from Kiddle encyclopedia articles (including the article images and facts) can be freely used under Attribution-ShareAlike license, unless stated otherwise. Cite this article:
John Pule Facts for Kids. Kiddle Encyclopedia.