John Sowden House, also known as the "Jaws House" or the "Franklin House", is a residence built in 1926 in the Los Feliz section of Los Angeles, California by Lloyd Wright. The house is noted for its use of ornamented textile blocks and for its striking facade, resembling (depending on the viewer's points of cultural reference) either a Mayan temple or the gaping open mouth of a great white shark.

The original owner, John Sowden, was a painter and photographer who hired his friend, Lloyd Wright (eldest son of Frank Lloyd Wright), to build his home on Franklin Ave in Los Feliz. The house is built using concrete textile blocks and Mayan themes, with decorative block-work along some of the interior walls. Upon approaching the "cave-like" front entrance, one passes through sculpted copper gates and then up "a narrow, tomb-like staircase" into the house. The building design follows a rectangular plan, with the rooms all opening into a 22' x 68' central courtyard by way of a narrow corridor. The courtyard originally contained a 32' long pool and fountain, which was removed sometime before 1940 and two textile-block water organs which were destroyed by an earthquake in the 1930s, probably the 1933 Long Beach earthquake. 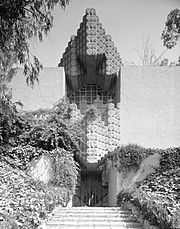 The building style of Sowden House is similar to Los Angeles area residences designed earlier in the 1920s by Frank Lloyd Wright, which include the Ennis House just to the northeast in the hills above Los Feliz Boulevard, the Hollyhock House in East Hollywood, the Storer House and Samuel Freeman House in the Hollywood Hills, and Millard House in Pasadena.

Contemporary reception of these Mayan revival residences was generally not positive, as critics derided the use of concrete blocks, the cheapest available material, in the construction of upscale homes. Opinions have since changed, and the houses built by the Wrights with textile blocks are now some of the most famous residential landmarks in the area, added to the U.S. National Register of Historic Places, and praised for their striking and innovative style.

Sowden House has been recognized as one of Lloyd Wright's most important works. When Lloyd Wright died in 1978, the Los Angeles Times wrote that Sowden House should be "hailed as the apogee of his residential work." The sharp ridges and lines of the facade have been said to resemble the gaping open mouth of a great white shark, resulting in the home's being known in Los Angeles as the "Jaws House." It has also been described as having a "cultic, brooding" appearance. The Los Angeles Times has additionally described it as a "quasi-Mayan-style mansion, an otherworldly apparition that looms over Franklin Avenue in Los Feliz," and "challenges the street."

This was the last residence built by the Wrights in this style, though the Mayan style roof line was also used by Lloyd Wright when he built the first "shell" for the Hollywood Bowl, constructed out of wood, which only lasted one year before being torn down.

The house, with seven bedrooms, four baths, and 5,600 square feet (520 m2), was listed on the market at $1,575,000 in 2001. It was purchased that year by Xorin Balbes for $1.2 million. Balbes, who said the house was "a wreck" when he bought it, spent $1.6 million in restorations, though some of his alterations drew criticism from preservationists as well as Lloyd Wright's son, Eric Lloyd Wright. In addition to restoring the deteriorating stonework, Balbes converted the three-room kitchen area into a large open kitchen, added new upscale bathrooms, and installed a pool and spa in the central court. Independent filmmaker Bashar Shbib was hired to design and realize the landscaping in and around the house. On viewing the renovations, Eric Lloyd Wright praised the new kitchen and landscaping, but criticized Balbes' decision to install a pool and spa in the middle of the courtyard. All of the house's rooms open onto the long central courtyard, which was originally a lawn that was used for seating during performances at the home. Eric Wright felt it was a "mistake" to break up the courtyard space with a pool and spa. Dana Hutt, an architectural historian who has written on the works of Lloyd Wright, was also critical of Balbes' alterations. She objected to the pool, to the refinement of the entry staircase, and to the addition of Asian elements that were "completely wrong" for Wright's Mesoamerican design.

All content from Kiddle encyclopedia articles (including the article images and facts) can be freely used under Attribution-ShareAlike license, unless stated otherwise. Cite this article:
John Sowden House Facts for Kids. Kiddle Encyclopedia.