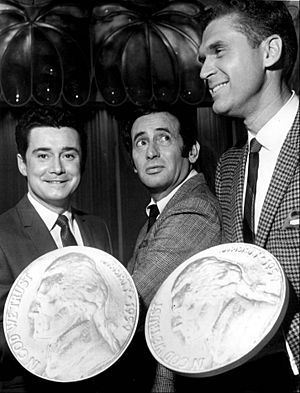 Johnny Mann (August 30, 1928 – June 18, 2014) was an American musical entertainer. He was an arranger, composer, conductor, and recording artist. He was the bandleader of The Johnny Mann Singers. He later worked with musicians such as Johnny Burnette, The Crickets and Eddie Cochran. He also worked a lot with Joey Bishop, such as working on his show. He a singer for Alvin and the Chipmunks. He was also a musical director for The Alvin Show, and voiced Theodore.

Mann was nominated for five Grammy Awards, winning two. He was signed with records such as Apex Records and Liberty Records.

Mann was born in Baltimore, Maryland. He was married to actress Lori Nelson from 1960 to 1973. He was finally married to Betty Mann from 1983 until his death.

All content from Kiddle encyclopedia articles (including the article images and facts) can be freely used under Attribution-ShareAlike license, unless stated otherwise. Cite this article:
Johnny Mann Facts for Kids. Kiddle Encyclopedia.