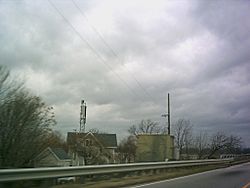 Jordan Point seen from the approach to the Benjamin Harrison Memorial Bridge; visible are the skeleton lighthouse tower and keeper's dwelling of the former Jordan Point Light

Jordan Point (or Jordan's Point) is a small unincorporated community on the south bank of the James River in the northern portion of Prince George County, Virginia, United States. 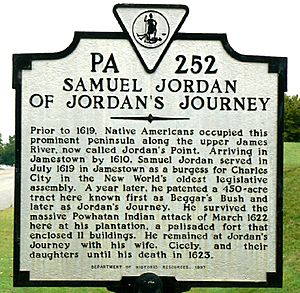 English settlers began arriving at Jamestown in 1607, and the property at Jordan's Point was first known as "Jordan’s Journey" in 1619. It was then located in Charles Cittie (sic), a "burrough" (sic) or "incorporation" (sic) of the Virginia Company of London, the early proprietor of the Virginia Colony. The first recorded owner was Samuel Jordan, who with his wife, Cecily, her two daughters, and their adult male servants, took up residence around 1620, Samuel Jordan died in 1623, and his widow married William Farrar, who moved to Jordan’s Journey, which appears to have been abandoned by 1635.

In 1656, the land at Jordan's Point was acquired by Theodorick Bland. In 1671, his son Richard Bland (I) of Berkeley Plantation inherited it, and established a home known as Jordan's Point Plantation there at some time before his death in 1720. 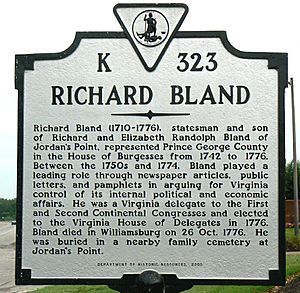 His son Richard Bland (II) (1710–1776) became the most famous man of that name in Virginia's history. The leading scholar of English Constitutional law in the colony in his day, Richard Bland served as a Justice of the Peace for Prince George County, as well as in the House of Burgesses. An early critic of slavery, Bland stated "under English government all men are born free", which prompted considerable debate with John Camm, a professor at Bland's alma mater, the College of William and Mary. Bland also argued the unfairness of the concept of "Taxation Without Representation" and may be the author of that famous phrase. Bland served as a delegate to the Continental Congress in 1774 and 1775, and thus is considered one of the Founding Fathers, although elderly by the time of the American Revolution. Richard Bland died on October 26, 1776, only a few months after the Declaration of Independence was adopted. He became the namesake of Richard Bland College and Bland County, Virginia. The Bland family cemetery is still located at Jordan Point.

Jordan Point was long the southern terminus of a ferry system across the James River connecting Prince George County with Charles City County on the north shore. In 1966, the Benjamin Harrison Memorial Bridge lift span bridge replaced the ferry system. In 1977 the tanker ship S.S. Marine Floridian steaming downstream in the early morning hours collided with the Benjamin Harrison Bridge, when its steering gear malfunctioned. The collision destroyed two spans and seriously damaged the drawbrige. As a result, the bridge was out of service for 20 months and ferry service was temporarily reinstated.

A small airport (now closed) was located near Jordan Point Marina for many years. A riverfront residential development, "Jordan On The James" now occupies the former airport site.

Jordan Point Marina was devastated by the storm surge from Hurricane Isabel in 2003 and over 100 boats and yachts were seriously damaged or destroyed. The marina has since been rebuilt.

All content from Kiddle encyclopedia articles (including the article images and facts) can be freely used under Attribution-ShareAlike license, unless stated otherwise. Cite this article:
Jordan Point, Virginia Facts for Kids. Kiddle Encyclopedia.