Hopewell is an independent city surrounded by Prince George County and the Appomattox River in the Commonwealth of Virginia. As of the 2020 census, the population was 23,033. The Bureau of Economic Analysis combines the city of Hopewell with Prince George County for statistical purposes.

Hopewell is in the Tri-Cities area of the Richmond Metropolitan Statistical Area (MSA).

The city was founded to take advantage of its site overlooking the James and Appomattox Rivers. City Point, the oldest part of Hopewell, was established in 1613 by Sir Thomas Dale. It was first known as "Bermuda City," which was changed to Charles City, lengthened to Charles City Point, and later abbreviated to City Point. (At this time, Bermuda, the Atlantic archipelago, was considered part of the Colony of Virginia and appeared on its maps.) Hopewell/City Point is the oldest continuously inhabited English settlement in the United States, Jamestown no longer being inhabited.

During the American Civil War, Union General Ulysses S. Grant used City Point as his headquarters during the Siege of Petersburg in 1864 and 1865. Grant's headquarters, which President Lincoln visited, were located at Appomattox Manor, one of the three plantations of Richard Eppes, who cultivated wheat and other grains and held 130 slaves at the beginning of the war.

His property included most of the present day city of Hopewell and Eppes Island, a plantation across the James River from City Point. Richard Slaughter, a former slave of Eppes, escaped to a Union ship during the Civil War, as did all but 12 of Eppes' 130 slaves, choosing freedom. Slaughter recounted his life story for a Works Progress Administration interviewer in 1936.

The City Point Railroad, built in 1838 between City Point and Petersburg, was used as a critical part of the siege strategy. It is considered the oldest portion of the Norfolk and Western Railway, now a part of Norfolk Southern.

Hopewell, part of the Eppes' plantation, was developed by DuPont Company in 1914 as Hopewell Farm, an incorporated area in Prince George County. DuPont first built a dynamite factory there, then switched to the manufacture of guncotton during World War I.

Nearly burned to the ground in the Hopewell Fire of 1915, the city prospered afterward and became known as the "Wonder City". Unlike most cities in Virginia, Hopewell was never incorporated as a town, but it was incorporated as an independent city in 1916.

After DuPont abandoned the city following World War I, moving its manufacturing facilities elsewhere and specializing in other products, Hopewell briefly became a ghost town until 1923 when Tubize Corporation established a plant on the old DuPont site. The same year, the city of Hopewell annexed the neighboring town of City Point, which enabled it to expand and thrive. The Tubize plant was later acquired by Firestone Tire and Rubber Company and was a major employer in Hopewell for decades. Allied Chemical and Dye Corporation and Hercules Chemical also established plants on portions of the old DuPont site.

Hopewell made national news when, on December 22, 1935, a bus plunged through the open draw of the Appomattox River Drawbridge on State Route 10 just outside Hopewell's city limits. Only one of the 15 occupants of the bus survived. The modern twin spans of the Charles Hardaway Marks Bridges were built to replace that bridge and cross the river nearby.

Like many cities, Hopewell embarked on an urban renewal plan in the 1960s in an attempt to revitalize its downtown retail area. The plan was a failure because many of the retail businesses that had been located downtown moved elsewhere to new shopping centers being developed just outside the city limits in Prince George County. A petition to annex these areas by Hopewell in the 1980s resulted in a protracted legal battle between the city and the county that lasted until 1990 when the Virginia Supreme Court denied Hopewell's petition. Other than a Hardee's restaurant constructed in the late 1970s and a branch bank building that was constructed in the early 1980s the downtown area that had been razed remained a large vacant gravel lot well into the 1990s when much of it was used to construct a new courthouse. 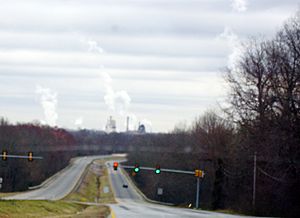 Hopewell is the location of several large chemical plants owned by the Honeywell Corporation, Ashland, Evonik Industries, as well as a paper mill owned by WestRock. Such industries have required the city and residents to deal with many environmental issues over the years, particularly as they learned more about the effects of the industries. The Kepone debacle of the 1970s received the most national attention.

Kepone was an insecticide produced by Allied Signal Company and LifeSciences Product Company in Hopewell. The improper handling and dumping of the substance into the nearby James River in the 1960s and 1970s drew national attention to its toxic effects on wildlife. As a result of the contamination the James River from Richmond to the Chesapeake Bay was closed to fishing for over a decade. The product was similar to DDT and is a degradation product of Mirex. In 2009, Kepone was included in the Stockholm Convention on Persistent Organic Pollutants, which banned its production and use worldwide

In 1977, Hopewell again made the national news due to another accident involving a drawbridge when the tanker S.S. Marine Floridian outbound under the command of a James River pilot suffered a steering malfunction just after dawn on February 24 that caused it to veer out of the channel and hit the Benjamin Harrison Memorial Bridge just east of town. The accident caused serious damage to the bridge and it was closed for months.

In 1983, Hopewell again received negative publicity from the national news media when it was discovered that Evelyn Rust Wells, an elderly woman, had been held captive and terrorized in her home in the City Point section. Her captors, mostly male teenagers under 18, cashed her Social Security checks at local grocery stores. A local grocer noted a change in purchases from when neighborhood kids assisted Wells, and called the police. They investigated and freed Wells who was by then severely malnourished.

Although still an important industrial city, Hopewell has struggled with transitions through loss of jobs due to plant closures, changes in residential housing patterns, and the costs of environmental clean-up. Much of its middle class population moved to neighboring Prince George and Chesterfield Counties for newer housing during the suburban expansion of the 1960s and 1970s. The city's housing stock is dominated by relatively small homes with a significant percentage being offered as rental properties. Of these, many were hastily constructed over a century ago by DuPont to house plant workers during the First World War.

Hopewell has encouraged re-development along its waterfront areas along the James and Appomattox Rivers, in the downtown area, and the City Point Historic District, as well as the sites of several long vacant industrial plants. Due to its hasty construction as a mill town during the First World War, Hopewell had a large number of kit homes that were hauled in and erected in neighborhoods laid out by DuPont known as "A Village" and "B Village". The city has a surviving group of Sears Catalog Homes, with several available for exterior viewing on a self-guided tour. The city also has numerous Aladdin Kit Homes; at one time, it may have had the most such homes in the nation. Because residents moved to newer houses and the Aladdin Homes were abandoned and deteriorated, many have been razed.

Since 1994, Hopewell has been twinned with Ashford, Kent, U.K.

In late 2012, press reports indicated the city had the highest rate of violent crime on a per capita basis in the state. 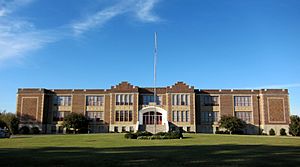 The former Hopewell High School, listed on the National Register of Historic Places, was renovated from 2009-2010 and now serves as an apartment building.

In September 2010, a series of explosions occurred at a new ethanol plant that had recently been constructed on a site formerly occupied by a Firestone facility. The plant had not yet become fully operational when the explosions occurred. There was no loss of life due to the accident but shortly after the explosion Osage BioEnergy, the owners of the $150 million facility, announced that the plant was for sale. Although the facility was sitting idle through 2013 with the city of Hopewell taking legal action to recoup unpaid taxes on the property, the facility was eventually purchased by another firm and operations were restarted in 2014. In 2015 the troubled ethanol plant closed again for a second time after less than a year in operation with its owners citing a lack of profitability as the reason for the shutdown. The plant's future is uncertain.

Hopewell has come to the attention of AAA because some of its members have complained that Hopewell is a speed trap for its practice of citing drivers for speeding along a 1.7 mile stretch of Interstate 295, nicknamed the "Million Dollar Mile" by disgruntled drivers. AAA, claimed in a press release that Hopewell employs 11 sheriff's deputies working in 14-hour shifts to patrol less than two miles of the highway that lie within the city limits of Hopewell. However, this statistic has been denied by the sheriff of Hopewell, who was baffled as to where that information was generated as he said the deputies working on I-295 only work eight-hour shifts. This practice, which it has been claimed, annually generated $1.8 million in revenue from speeding tickets, of which 75% were issued to out of state drivers, triggered a court clash between the Commonwealth's Attorney and the city prosecutor, and elicited an official ruling from the Attorney General of Virginia. Sheriff Luther Sodat said that the almost two-mile stretch of highway “is a safety issue for Hopewell.” Virginia's urban interstates have a fatality rate about one-third the Statewide rate for all roads combined.

Another instance of Hopewell gaining unwanted media attention happened in March 2015 when 600 gallons of diesel fuel spilled into the Appomattox River near the intake for the city's drinking water. An employee noticed the spill on the night of March 2 at around 10:00 PM and notified his superiors who immediately shut down the city's intake of fresh water. At around 6:00 AM the city announced a mandatory emergency water conservation notice knowing that the storage tanks at the Virginia American Water Company and other water towers around the city would run dry. Some residents and businesses started running out of water around 6:00 PM on March 3 while others, that were closer to the water towers, had very low water pressure. The city started handing out bottled and bulk drinking water around 7:00 PM on March 3. A state of emergency was also declared on March 3 to help mobilize additional help for the city and its residents. After a hazmat company cleaned the diesel out of the river, and the Virginia Department of Health tested and detected no diesel in the intake water, the Virginia American Water Company restarted its pumps around 8:00 PM with water service slowly returning to the city. Around this time the city issued a precautionary boil water advisory, not due to the diesel itself, but for potential bacteria in the system since the water had been turned off and the storage tanks ran dry. The city, in addition to Food Lion, continued to give out free water to residents on March 4 through the 6th. On the morning of March 6 the boil water advisory was lifted.

The climate in this area is characterized by hot, humid summers and generally mild to cool winters. According to the Köppen Climate Classification system, Hopewell has a humid subtropical climate, abbreviated "Cfa" on climate maps.

The following are schools in the Hopewell, Virginia school division.

All of the schools above are accredited by the Virginia Board of Education and by the Southern Association of Colleges and Schools.

All content from Kiddle encyclopedia articles (including the article images and facts) can be freely used under Attribution-ShareAlike license, unless stated otherwise. Cite this article:
Hopewell, Virginia Facts for Kids. Kiddle Encyclopedia.