City Point was a town in Prince George County, Virginia, that was annexed by the independent city of Hopewell in 1923. It served as headquarters of the Union Army during the siege of Petersburg during the American Civil War. 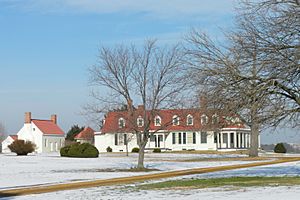 During the American Civil War, City Point was the headquarters of General Ulysses S. Grant during the Siege of Petersburg in 1864 and 1865. To serve the Union army, two huge military installations were built—a supply depot and the Depot Field Hospital. During that siege, City Point was one of the busiest ports in the world.

On March 27 or 28, 1865, President Abraham Lincoln met at City Point with Generals Grant and William Tecumseh Sherman along with Admiral David Porter aboard the River Queen, as depicted by G.P.A Healy's 1868 painting The Peacemakers.

The City Point Railroad, built in 1838 between City Point and Petersburg, became part of the South Side Railroad in 1854, and played an important role in the Civil War. It later became the oldest portion of the Norfolk and Western Railway, itself now a part of Norfolk Southern. 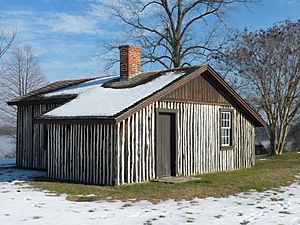 Cabin occupied by General U.S. Grant during the siege. 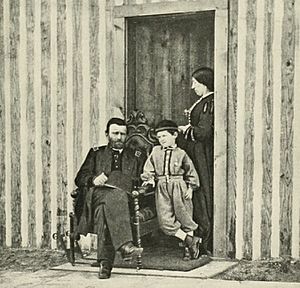 Grant at City Point in 1864 with his wife, Julia, and son Jesse

On August 9, 1864, a tremendous explosion shook the city. General Grant reported, "Every part of the yard used as my headquarters is filled with splinters and fragments of shell," and a staff officer wrote, "Such a rain of shot, shell, bullets, pieces of wood, iron bars and bolts, chains and missiles of every kind was never before witnessed."

Examination of the wreckage revealed that a barge loaded with ammunition had exploded, detonating 30,000 artillery shells and 75,000 rounds of small arms ammunition. 43 people were killed instantly and 126 were wounded (some accounts put the death toll at 300). The wharf was almost entirely destroyed and the damage was put at $2 million.

After the war it was discovered that the explosion had been an act of sabotage. Confederate Secret Service agent John Maxwell had smuggled a bomb aboard the ammunition barge. Maxwell used a clockwork mechanism to ignite 12 pounds of gunpowder packed into a box marked "candles." He called it his "horological torpedo." (Horological referring to time keeping; torpedo was a term used in the Civil War for a wide variety of bombs and booby traps.) Here is a portion of Maxwell's report, taken from the Official Records.

I have the honor to report that in obedience to your order, and with the means and equipment furnished me by you, I left this city on the 26th of July last, for the line of the James River, to operate with the Horological Torpedo against the enemy’s vessels navigating that river. I had with me Mr. R. K. Dillard, who was well acquainted with the localities, and whose service I engaged for the expedition. On arriving in Isle of Wright County, on the 2nd of August, we learned of immense supplies of stores being landed at City Point, and for the purpose, by stratagem, of introducing our machine upon the vessels there discharging stores, started for that point. We reached there before daybreak on the 9th of August last, with a small amount of provisions, having traveled mostly by night and crawled upon our knees to pass the East picket line. Requesting my companion to remain behind about half a mile, I approached cautiously the wharf with my machine and powder covered by a small box.

Finding the captain had come ashore from a barge then at the wharf, I seized the occasion to hurry forward with my box. Being halted by one of the wharf sentinels, I succeeded in passing him by representing that captain had ordered me to convey the box on board. Hailing a man from the barge, I put the machine in motion and gave it in his charge. He carried it aboard. The magazine contained about twelve pounds of powder. Rejoining my companion, we retired to a safe distance to witness the effect of our effort. In about an hour the explosion occurred. Its effect was communicated to another barge beyond the one operated upon and also to a large wharf building containing their stores (enemy’s), which was totally destroyed. The scene was terrific, and the effect deafened my companion to an extent from which he has not recovered. My own person was severely shocked, but I am thankful to Providence that we have both escaped without lasting injury. We obtained and refer you to the enclosed slips from the enemy’s newspapers, which afford their testimony of the terrible effects of this blow. The enemy estimates the loss of life at 58 killed and 126 wounded, but we have reason to believe it greatly exceeded that. The pecuniary damage we heard estimated at $4,000,000 but, of course, we can give you no account of the extent of it exactly.

The explosion didn't much hinder the Union war effort. The City Point supply depot was back in full operation in nine days. Although sabotage was not yet affirmed, the ammunition supply wharf was rebuilt to a much higher degree of security.

All content from Kiddle encyclopedia articles (including the article images and facts) can be freely used under Attribution-ShareAlike license, unless stated otherwise. Cite this article:
City Point, Virginia Facts for Kids. Kiddle Encyclopedia.