Petersburg National Battlefield is a National Park Service unit preserving sites related to the American Civil War Siege of Petersburg (1864–65). The Battlefield is centered on the city of Petersburg, Virginia, and also includes outlying components in Hopewell, Prince George County, and Dinwiddie County. Over 140,000 people visit the park annually.

After leaving the Visitor Center, one can begin their park tour. A motor tour route runs from Virginia Route 36 to US Route 301. Along the way, visitors can view sites such as Fort Stedman and The Crater.

Located in Dinwiddie County about 14 miles (23 km) southwest of downtown Petersburg, this unit contains the site of the Battle of Five Forks, which destroyed a sizable portion of the remaining Confederate Army of Northern Virginia. Sometimes called the "Waterloo of the Confederacy," Five Forks helped set in motion a series of events that led to Robert E. Lee's subsequent surrender at Appomattox Court House. 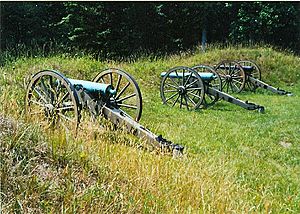 Battery XVI in the Main Unit

Sited next to the James River in Hopewell, City Point served as a major command and logistics hub for the Union Army during the Siege of Petersburg. It is located in the City Point Historic District. 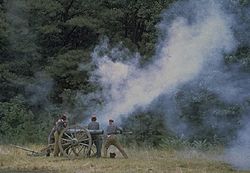 All content from Kiddle encyclopedia articles (including the article images and facts) can be freely used under Attribution-ShareAlike license, unless stated otherwise. Cite this article:
Petersburg National Battlefield Facts for Kids. Kiddle Encyclopedia.