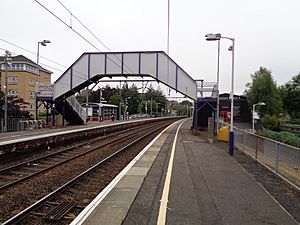 Jordanhill railway station is a side platformed suburban railway station in the Jordanhill area in the West End of Glasgow, Scotland. The station, which is governed by Transport Scotland and managed by Abellio ScotRail, lies on the Argyle Line and the North Clyde Line.

It is located near the Jordanhill Campus of the University of Strathclyde and sits atop Crow Road, an important western thoroughfare in Glasgow and the main route to the Clyde Tunnel. The station is five stops and eleven minutes' journey time from Glasgow Central on the Argyle Line. Trains on the North Clyde Line pass through without stopping at the station.

The station opened on 1 August 1887 as part of the Glasgow, Yoker and Clydebank Railway. Construction of the station structure was not completed until 1895, with modular-design wooden buildings, commonly seen on the new suburban railway lines, being built on both platforms. The station is located on part of the former site of brick and tile works, Jordanhill being an area of artisans and miners until the close of the nineteenth century. The railway station arrived just as much of the local industry was declining, giving residents, who previously had to walk to Hillhead or Partick to find transport into Glasgow, proper access to the city centre.

All content from Kiddle encyclopedia articles (including the article images and facts) can be freely used under Attribution-ShareAlike license, unless stated otherwise. Cite this article:
Jordanhill railway station Facts for Kids. Kiddle Encyclopedia.