José Santos Arraño Acevedo (14 October 1921 - 24 November 2009) was a famous writer and historian from Pichilemu, mostly known for his books on the history of the city. 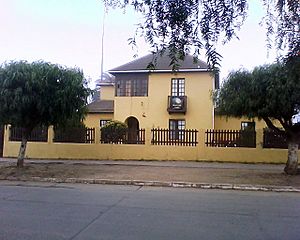 Arraño was one of the 12 sons of José Luis Arraño Ortiz and María Soledad Acevedo Caro.

During his childhood he lived in Pichilemu, and he later went to study in Los Hermanos Maristas School in San Fernando and the Pontifical Seminary of Santiago.

He was a collaborator of the Santiago's press through articles devoted to Pichilemu and Colchagua, publishing in newspapers such as Las Últimas Noticias or La Época and in dozens of other regional newspapers, taking Arraño Acevedo as the most important historian of Pichilemu and the most dedicated to promote Pichilemu's tourism. All his articles were included in two books: Pichilemu y Sus Alrededores Turísticos and Hombres y Cosas de Pichilemu. He habitually read his articles in his radial program, that was broadcasted for almost a decade, La Hora de José Arraño Acevedo.

During this time, one of his quotes became famous:

On November 21, 2009 he was taken to Pichilemu Hospital, and died three days later of pneumonia at the age of 88.

All content from Kiddle encyclopedia articles (including the article images and facts) can be freely used under Attribution-ShareAlike license, unless stated otherwise. Cite this article:
José Arraño Facts for Kids. Kiddle Encyclopedia.