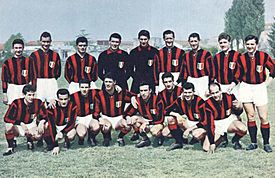 Juan Alberto "Pepe" Schiaffino Villano ( 28 July 1925 – 13 November 2002) was an Italian-Uruguayan football player who played as an attacking midfielder or forward. A highly skilful and creative playmaker, at club level, he played for CA Peñarol in Uruguay, and for A.C. Milan, and Roma in Italy. At international level, he won the 1950 FIFA World Cup with the Uruguayan national team, and also took part at the 1954 FIFA World Cup; he later also represented the Italy national football team.

He was ranked as the best Uruguayan footballer of all time by an IFFHS poll, and the 17th greatest player of the twentieth century.

Following his eight successful years in Peñarol in his native Uruguayan league, Schiaffino was purchased by Italian Serie A club A.C. Milan, for an at the time world record fee of 52 million Lire, in September 1954. He played 171 games with A.C. Milan and scored 60 goals, and participated in the 1958 European Cup Final, which Milan lost to Real Madrid 2–3 (aet). He was among the crucial offensive players in a Milan team that was dominated by foreign stars such as Nils Liedholm and Gunnar Nordahl. Schiaffino won three national championships with Milan, the victories being in 1955, 1957 and 1959. Schiaffino left in 1960 to join Roma, where he played out his career during two moderately successful seasons, in which Roma finished fifth in the standings.

Schiaffino participated actively in Uruguay's victory in the 1950 World Cup, scoring one goal in the final and beating Brazil in its own stadium, in what was called the Maracanazo. He also played in the 1954 World Cup, helping his nation to a fourth-place finish in the tournament.

A tactically versatile player, with a slender physique, Schiaffino was usually deployed as a left-sided inside forward or second striker in the early part of his career, in particular with CA Peñarol and A.C. Milan, or as an attacking midfielder, although he was also capable of playing as a deep-lying playmaker in midfield, a role which he occupied more frequently as his career progressed. Schiaffino was renowned for his creative ability and for having a unique capacity to read the game, organise his teammates, orchestrate goalscoring opportunities, and dictate the tempo of his team's play in midfield, which made him a highly proficient playmaker and assist provider; as a footballer, he was best known for his excellent technical ability, passing range, intelligence, positional sense, leadership, and vision. A well-rounded and hard-working player, who is regarded by pundits as one of the greatest footballers of all time, in addition to his skill, elegance, and creativity on the ball, Schiaffino was also known for his defensive contribution and willingness to track back, put pressure on opponents, and challenge them for the ball, often with sliding tackles; his wide range of skills also enabled him to play as a sweeper with Roma in his later career.

Schiaffino died on 13 November 2002. His remains are buried at the Cementerio del Buceo, Montevideo.

All content from Kiddle encyclopedia articles (including the article images and facts) can be freely used under Attribution-ShareAlike license, unless stated otherwise. Cite this article:
Juan Alberto Schiaffino Facts for Kids. Kiddle Encyclopedia.