Juglans hindsii has only one confirmed native stand remaining. It is listed as Seriously Endangered on the California Native Plant Society Rare Plant Inventory. The IUCN classification is a Vulnerable species. It is threatened by hybridization with orchard trees, urbanization, and habitat conversion to agriculture. 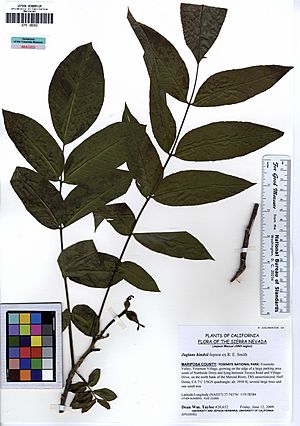 A specimen of Juglans hindsii from the Yosemite Museum

The leaf is approximately 1 foot (0.30 m) long, with 13-21 leaflets per leaf, each 2-5" long, with dentate margins. Unlike the Southern California walnut, the vein angles bear tufts of hair.

The nut has a smooth, brown, thick shell, that contains a small edible nutmeat.

Hind's Walnut (Juglans hindsii) is a severe allergen. Pollination: Occurs in following seasons depending on latitude and elevation: Spring.

Juglans hindsii has been commercially important as a rootstock for orchard stock of Juglans regia (English walnut) trees all over the world. It is also used as a parent to the fast-growing Luther Burbank hybrid rootstock, commonly called "Paradox" (Juglans hindsii x Juglans regia).

The Northern California walnut is cultivated by specialty California native plant nurseries. It is used as an ornamental tree in traditional and wildlife gardens, and for habitat gardens, natural landscaping projects, and climate compatible drought tolerant gardens. The tree is also planted in habitat restoration projects.

Juglans hindsii is infested by Rhagoletis juglandis, commonly known as the walnut husk fly, which lays its eggs in the husks of walnut fruit. R. juglandis infests other varieties of walnut trees as well, such as Juglans regia (the English or Persian walnut), Juglans rupestris (a species of walnut indigenous to Arizona and Texas), and Juglans hindsii (the California black walnut).

The wood of Juglans hindsii is commonly called claro walnut by the lumber industry and woodworkers. It is highly figured with a rich brown color and striking grain patterns, especially in the crotch areas, where large limbs meet the trunk. It is used in small quantities to make fine furniture and gun stocks, and sold as slabs to make large natural-top tables because of its durability, good working properties, and swirling iridescent figure.

Some confusion exists about the nature of claro walnut because Juglans hindsii is commonly used as the rootstock of orchard trees. The section below the original graft is claro walnut wood, while the section above is the lighter-colored English walnut. Some woodworkers take advantage of this by making the color change a feature of their work.

The current classification of the plant is as a distinct species. Some botanists and the 1993 edition of "The Jepson Manual" had classified it as Juglans californica subsp. hindsii, a subspecies of Juglans californica (Southern California black walnut).

All content from Kiddle encyclopedia articles (including the article images and facts) can be freely used under Attribution-ShareAlike license, unless stated otherwise. Cite this article:
Juglans hindsii Facts for Kids. Kiddle Encyclopedia.