Junayd of Baghdad facts for kids

Junayd of Baghdad (Persian: جُنیدِ بَغدادی; 830–910) was a Persian mystic and one of the most famous of the early Islamic saints. He is a central figure in the spiritual lineage of many Sufi orders.

Junayd taught in Baghdad throughout his lifetime and was an important figure in the development of Sufi doctrine. Like Hasan of Basra before him, was widely revered by his students and disciples as well as quoted by other mystics. Because of his importance in Sufi theology, Junayd was often referred to as the "Sultan". 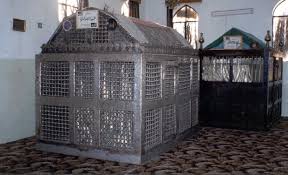 The exact birth date of Abu-l-Qāsim al-Junayd ibn Muḥammad ibn al-Junayd al-Khazzāz al-Qawārīrī (Arabic: أبو القاسم الجنيد بن محمد الخزاز القواريري) is disputed and ranges from 210 to 215 AH according to Abdel-Kader. His death is more certain and ranges from 296 to 298 AH (908 to 910 CE). It is believed that al-Junayd was of Persian ancestry, with his ancestors originating in Nihawand in modern-day Iran. Al-Junayd was raised by his uncle Sirri Saqti after being orphaned as a boy. Al-Junayd's early education included teachings from Abū Thawr, Abū 'Ubayd, al-Ḥārith al-Muḥãsibī, and Sarī ibn Mughallas.

As to the hagiography by Attar of Nishapur, the Tazkirat al-Awliya, iad felt the pain of divine separation since childhood. Regardless of spiritual sorrow, he was known for his quick understanding and discipline. When Sirri Saqti accepted him. According to Attar, Junayd was only seven years of age when Sirri Saqti took him along for the Hajj. In al-Masjid an-Nabawi, there were 400 sheikhs discussing the concept of ‘thankfulness’ whereby each expounded his own view. When Sirri Saqti told him to present his definition, Junayd said, "Thankfulness means that should not disobey God by means of the favour which he has bestowed upon you nor make of His favour a source of disobedience." The sheikhs unanimously agreed that no other words could define the term better. Sirri Saqti asked Junayd from where he learn all this. Junayd replied, "From sitting with you."

His traditional hagiography continues by stating that Junayd went back to Baghdad and took up selling glasses. However, he spent most of the time in prayer. Hence, he retired to the porch of Sirri Saqti's house and kept himself away from worldly matters devoting his thoughts only to God. People need to "relinquish natural desires, to wipe out human attributes, to discard selfish motives, to cultivate spiritual qualities, to devote oneself to true knowledge, to do what is best in the context of eternity, to wish good for the entire community, to be truly faithful to God, and to follow the Prophet in the matters of the Shari’a." This starts with the practice of asceticism (zuhd) and continues with withdrawal from society, intensive concentration on devotion (ibadah) and remembrance (dhikr) of God, sincerity (ikhlas), and contemplation (muraqaba) respectively; contemplation produces fana.

Junayd spend 40 years in his mystic course praying while sacrificing his sleep and any other worldly desires but then a conceit in his heart arose that he has achieved his goal. By then he inspired by God that "He who is not worthy of union, all his good works are but sins." This meant that the prayers which become a source of pride are useless as true prayer makes a person more humble and devoted to God. His name became famous in many parts of the world despite the persecution he faced and the tongues of slander shot at him. Even then, he did not start preaching until 30 of the great saints indicated to him that he should now call men to God. However, he chose not to preach as yet saying, "While the master is there, it is not seemingly for the disciple to preach." After witnessing Muhammad in his dream commanding him to preach, he had to listen to Sirri Saqti. The intensity of ishq poured out of speech of Junayd such that out of the 40 people he first preached, 18 died and 22 fainted. His caliph and most dear disciple was Abu Bakr Shibli.

Junayd helped establish the "sober" school of Sufi thought, which meant that he was very logical and scholarly about his definitions of various virtues, tawhid, etc. Sober Sufism is characterized by people who "experience fana [and] do not subsist in that state of selfless absorption in God but find themselves returned to their senses by God. Such returnees from the experience of selflessness are thus reconstituted as renewed selves," just like an intoxicated person sobering up. For example, Junayd is quoted as saying, "The water takes on the color of the cup." While this might seem rather confusing at first, ‘Abd al-Hakeem Carney explains it best: "When the water is understood here to refer to the Light of Divine self-disclosure, we are led to the important concept of 'capacity,' whereby the Divine epiphany is received by the heart of any person according to that person’s particular receptive capacity and will be 'colored' by that person’s nature".

Also, according to Sells, "Junayd seems to presuppose that his hearer or reader has had the experience about which he is speaking – or, even more radically, that the hearer or reader is able to enter that experience, or some re-creation of it – at the moment of encounter with Junayd's words." This statement makes it seem like Junayd was writing to a specific sect of the elite that he described earlier. The elite that he refers to are the elect, or "a tightly-knit group of 'brethren' that Junayd designates by such phrases as 'the choice of believers' or 'the pure ones'. They play significant roles in the community of believers."

All content from Kiddle encyclopedia articles (including the article images and facts) can be freely used under Attribution-ShareAlike license, unless stated otherwise. Cite this article:
Junayd of Baghdad Facts for Kids. Kiddle Encyclopedia.