Junction City is a home rule-class city in Boyle County on its border with Lincoln County in the U.S. state of Kentucky. Junction City's population was 2,241 at the 2010 U.S. census. It is part of the Danville Micropolitan Statistical Area.

Junction City began when the Louisville and Nashville Railroad reached the area. It was originally known as Goresburgh for the proprietors of the Gore Hotel. The Gore post office opened in 1880, was renamed Goresburgh in 1882, and then finally renamed Junction City when the Cincinnati Southern Railway had reached town later that year. The city was formally incorporated 8 April 1882 by the state assembly . The L&N station there was known as Danville Junction for its proximity to the larger city of Danville.

The southeastern part of Junction City was once the separate town of Shelby City, incorporated in 1867, and named for Kentucky's first governor Isaac Shelby, who lived and was buried nearby. This community's separate post office was known as South Danville when it was established 26 April 1866, renamed Shelby City the next year (the eastern portion of Junction City is still known as Shelby City), and closed in 1926. It was also known as Briartown and its L&N station was called Danville Station. The tomb of Kentucky's first governor Isaac Shelby is located barely over the Lincoln County Lincoln County, Kentucky line, just south of this part of town. 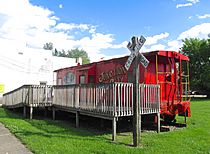 Caboose on display in Junction City

There were 876 households, out of which 34.8% had children under the age of 18 living with them, 47.4% were married couples living together, 18.8% had a female householder with no husband present, and 29.5% were non-families. 25.6% of all households were made up of individuals, and 12.3% had someone living alone who was 65 years of age or older. The average household size was 2.49 and the average family size was 2.93.

All content from Kiddle encyclopedia articles (including the article images and facts) can be freely used under Attribution-ShareAlike license, unless stated otherwise. Cite this article:
Junction City, Kentucky Facts for Kids. Kiddle Encyclopedia.