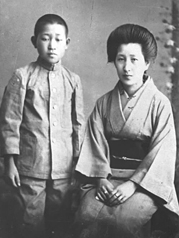 Matsushita and the wife of a bicycle shop owner. Matsushita worked in the shop. (c. 1904–5)

Kōnosuke Matsushita was born on 27 November 1894 in Wakayama Prefecture. His father was an affluent landlord in the farming village of Wasa (part of present-day Wakayama city) and was one of the wealthiest men of his community.

Shortly after Matsushita left school, he was sent away to Osaka to become an apprentice for a hibachi store. Less than a year into his apprenticeship however, the business failed and Matsushita was left looking for other employment. He then applied for a job with the Osaka Electric Light Company, an electrical utility company. Over the next couple of years, he was promoted several times and his position rose with the company. During this time, Matsushita was introduced to one of his sister's friends, Mumeno Iue, and after a short courtship married her. Matsushita, now head of a new family, was well aware of his new responsibilities.

At the age of 22, he was promoted to the position of electrical inspector. It was during this time that Matsushita attempted to introduce his boss to the invention of a new and improved light socket that he had perfected in his spare time. His boss, however, was not enthusiastic. 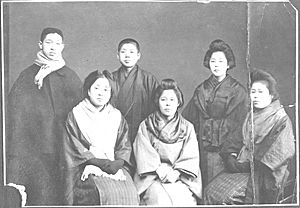 In 1917, Matsushita left Osaka Electric Light Company to set up his own company. Without capital, a formal education, or experience in manufacturing, it would appear the company would fail before it even began. He set up his shop in the basement of his tenement. With his wife, his brother-in-law, and several assistants, he began creating several samples of his product. He attempted to peddle the samples to wholesalers but was unsuccessful because he did not offer more than one product.

Matsushita's assistants left his company and he was left with only his wife and brother-in-law, Toshio Iue, who proved to be a capable salesman and manager. Matsushita would have eventually become bankrupt but he was "saved by an unexpected order for a thousand insulator plates for electric fans." From there, Matsushita was able to continue producing his light sockets. They became popular as wholesalers realized the product was better in quality and less expensive than comparable products in the market. The early years of the company were difficult: he once had to pawn his wife's kimono when he found himself short on money. Matsushita's products were originally marketed under the name brand of "National" and later moved on to the more recognizable names of Panasonic, Quasar and Technics.

One of Matsushita's best products was his invention of a more efficient battery-powered bicycle lamp. During the 1920s, bicycle lamps were candles or oil-burning lamps. They were highly inefficient as they usually only lasted for three hours. He created an oval lamp that used a battery for power and a lightbulb for illumination. He had to personally market his products to retail bicycle shops.

Matsushita learned a very important lesson in terms of growing a company while he was trying to introduce his bicycle lamp to wholesalers. He realized that even if he had a product that was superior to anything out in the market it would not matter if he could not sell the product. As a result, Matsushita began devising ways to create sales channels for his products by concentrating less on manufacturing and more on building a sales force, which led to a retail store network and finally placed Matsushita's company on the map in Japan's electrical manufacturing and retail industry.

In 1929, he began setting up a new structure for his company. The company was structured as a parent company and branches of divisions that specialized in a particular product were created. There were three specific products that were being created in Matsushita's company at this time: the bicycle lamp and battery division, the electrical socket division, and the radio division. For each of these products, a national sales department was formed with regional offices established in strategic locations. These regional offices were responsible for the coordination of sales and manufacturing. Products were manufactured based upon the demand for the products. As a result, manufacturing was dependent on sales.

During the US occupation of Japan after World War II, General Douglas MacArthur decided to break up the zaibatsu business conglomerates of Japan. Matsushita was in danger of being removed as president but was saved by a favorable petition signed by 15,000 employees. In 1947, Kōnosuke lent his brother-in-law Toshio an under-utilized manufacturing plant to manufacture bicycle lamps, a business that eventually became Sanyo Electric.

From 1950 to 1973, Matsushita's company became one of the world's largest manufacturers of electrical goods, sold under well-known trademarks including Panasonic and Technics. Matsushita stepped down as President of Panasonic in 1961 and was succeeded as president by his son-in-law, Masaharu Matsushita. Konosuke Matsushita's two grandsons are Masayuki Matsushita, who is the current Vice-Chairman of Panasonic, and Hiro Matsushita, who is a former driver in the Champ Car series and owns Swift Engineering, an aerospace firm and race car constructing company which he bought in 1991. Hiro Matsushita is also the chairman of Swift Xi, which located in Kobe, Japan.

Konosuke Matsushita remained active in Panasonic's operations until his complete retirement in 1973. Since 1954, Matsushita also gained a significant shareholding in manufacturer JVC by forming an alliance. It still retains a 50% share today. In retirement, Matsushita focused on developing and explaining his social and commercial philosophies and wrote 44 published books. One of his books, entitled “Developing A Road To Peace And Happiness Through Prosperity”, sold over four million copies. In 1979, at the age of 84, he founded the Matsushita School of Government and Management to train the future politicians and businessmen of Japan.

In 1987, he was awarded the Grand Cordon of the Order of the Paulownia Flowers.

Chronic lung problems led to his death from pneumonia on 27 April 1989, at the age of 94. He died with personal assets worth US$3 billion, and left a company with US$42 billion in revenue business. 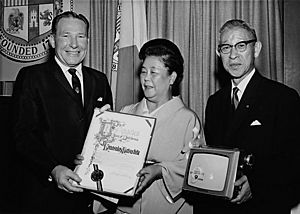 All content from Kiddle encyclopedia articles (including the article images and facts) can be freely used under Attribution-ShareAlike license, unless stated otherwise. Cite this article:
Kōnosuke Matsushita Facts for Kids. Kiddle Encyclopedia.