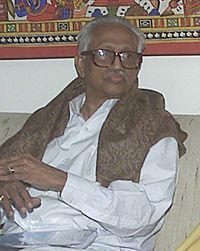 He was the General Secretary of Dravida Munnetra Kazhagam (DMK) from 1977 until his death. He was elected as a member of the Tamil Nadu Legislative Assembly from 1957 to 1962, 1971 to 1991 and again from 1996 to 2011. He also was finance minister and education minister of Tamil Nadu under the governments of M. Karunanidhi.

Anbazhagan died on 7 March 2020 of multiple organ failure at a hospital in Chennai at the age of 97.

All content from Kiddle encyclopedia articles (including the article images and facts) can be freely used under Attribution-ShareAlike license, unless stated otherwise. Cite this article:
K. Anbazhagan Facts for Kids. Kiddle Encyclopedia.