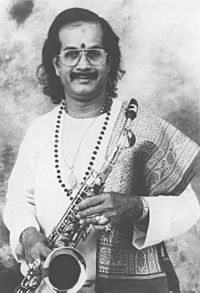 Dr. Kadri Gopalnath (6 December 1949 – 11 October 2019) was an Indian alto saxophonist and composer. He was known for his works towards Carnatic music. He was born in Bantwal taluk, Dakshina Kannada, Karnataka. He composed the score for the 1994 movie Duet.

Gopalnath died on 11 October 2019 due to cardiac arrest at the age of 69 at a private hospital in Mangalore.

All content from Kiddle encyclopedia articles (including the article images and facts) can be freely used under Attribution-ShareAlike license, unless stated otherwise. Cite this article:
Kadri Gopalnath Facts for Kids. Kiddle Encyclopedia.