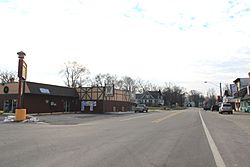 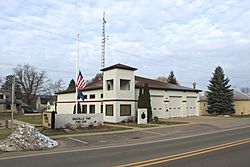 Unadilla Township is a civil township of the southwest corner of Livingston County, Michigan, United States. The population was 3,190 at the 2000 census.

There are no incorporated municipalities in the township. There are a few unincorporated communities and historic locales.

Unadilla was formed by an act of the Legislative Council of the Territory of Michigan on March 26, 1835, and initially included what is now Iosco Township to the north and a portion of Lyndon township in Washtenaw County on the south. The first township meeting was held on the first Monday of April 1835. Since Livingston County government was not organized until 1836, the township was at first attached to Washtenaw County. On March 6, 1838, Iosco Township was set off and with the southern portion being assigned to Lyndon Township, Unadilla assumed its present boundaries.

The first land purchase in the township was recorded on June 20, 1833 by Eli Ruggles of Brookfield, Connecticut, while accompanied by his brother-in-law, Amos Williams, and Nathaniel Noble, an acquaintance who lived nearby in Dexter. After returning to Connecticut, Ruggles became ill and died. Williams returned to the land in the fall of 1833 with his son, Samuel, son-in-law, Gary Briggs and Briggs' wife. The land purchase was recorded as the north half of the northwest quarter of section 33, which would have been 80 acres (320,000 m2), but in subsequent accounts was frequently described as 40 acres (160,000 m2). During that winter the Williams and family built a sawmill, which began operations in the spring of 1834.

The estimated 2002 population for Unadilla Township was 3,721.

There were 1,156 households out of which 34.3% had children under the age of 18 living with them, 63.6% were married couples living together, 7.8% had a female householder with no husband present, and 24.1% were non-families. 18.9% of all households were made up of individuals and 6.1% had someone living alone who was 65 years of age or older. The average household size was 2.74 and the average family size was 3.11.

All content from Kiddle encyclopedia articles (including the article images and facts) can be freely used under Attribution-ShareAlike license, unless stated otherwise. Cite this article:
Unadilla Township, Michigan Facts for Kids. Kiddle Encyclopedia.