Pinckney is a village in Putnam Township, Livingston County in the U.S. state of Michigan. The population was 2,427 at the 2010 census.

Among the first American pioneers in the area around Pinckney were William Kirkland and his family, who moved from New York in the late 1820s. Kirkland named the community after his brother, Charles Pinckney Kirkland. Platted in 1837, Pinckney was incorporated as a village in 1883.

There were 869 households, of which 45.5% had children under the age of 18 living with them, 56.4% were married couples living together, 13.6% had a female householder with no husband present, 4.6% had a male householder with no wife present, and 25.4% were non-families. 21.5% of all households were made up of individuals, and 6.5% had someone living alone who was 65 years of age or older. The average household size was 2.78 and the average family size was 3.25. 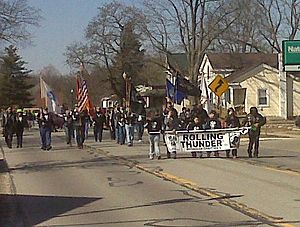 Pinckney is the location of a number of festivals throughout the year, including an annual parade on Saint Patrick's day as well as Art in the Park and Hootin' in the Park village events. There is an annual parade on Memorial Day, where various organizations throughout the community participate in the parade. A few of the participating organizations are from Pinckney High School, including the marching band and spring sports teams. The Pinckney Community Schools is also home to the award-winning Pinckney High School orchestra program. It is the only school orchestra program in Livingston county and hosts the Ann Arbor Symphony Orchestra annually for a "Side by Side Orchestra Gala" in the Jane Tasch Theater.

Pinckney is home to Pinckney Community Schools, which consists of Pinckney High School, Pathfinder School, Navigator Upper Elementary, Country Elementary, & Farley Hill Elementary. Lakeland Elementary, Pinckney Elementary and Hamburg Elementary have been closed due to the decrease of residents in the area. Also home to a Montessori Charter school called Light of the World Academy, and St. Marys Catholic School.

All content from Kiddle encyclopedia articles (including the article images and facts) can be freely used under Attribution-ShareAlike license, unless stated otherwise. Cite this article:
Pinckney, Michigan Facts for Kids. Kiddle Encyclopedia.