Kanorado is a city in Sherman County, Kansas, United States. The name is a portmanteau of Kansas and Colorado, because it is near the stateline. As of the 2020 census, the population of the city was 153.

The first post office at Kanorado was established in 1889, but the post office was called Lamborn until 1903. 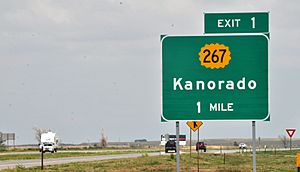 Interstate 70 in Kansas, Exit One, Kanorado

In 1873, Cutler's History of the State of Kansas characterized the county as "very level land and almost treeless. Beaver Creek, Little Beaver and both forks of the Sappa River, rise in this county, and the North Fork of the Smoky Hill, passes from Colorado into the south part of the county, and out of it into Wallace." In the main, farming is by irrigation.

There were 73 households, of which 23.3% had children under the age of 18 living with them, 54.8% were married couples living together, 2.7% had a female householder with no husband present, 2.7% had a male householder with no wife present, and 39.7% were non-families. 35.6% of all households were made up of individuals, and 17.8% had someone living alone who was 65 years of age or older. The average household size was 2.10 and the average family size was 2.68.

Kanorado exit on Interstate 70, the west most exit in Kansas (2015)

The Kyle Railroad passes along the south edge of the city.

U.S. Route 24 passes along the south edge of the city and follows roughly parallel to the railway.

All content from Kiddle encyclopedia articles (including the article images and facts) can be freely used under Attribution-ShareAlike license, unless stated otherwise. Cite this article:
Kanorado, Kansas Facts for Kids. Kiddle Encyclopedia.