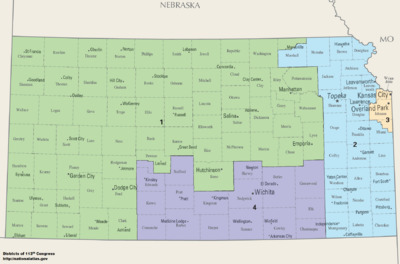 Kansas has 4 congressional districts. Each has a member in the United States House of Representatives.

List of members of the Kansas United States House delegation, their terms, their district borders, and the districts' political rating from the CPVI. For the 116th Congress, there are 3 Republicans and 1 Democrat.

Historically, the state has at most eight seats (1893–1933). The number of seats decreased from five to four after the 1990 Census.

Table of United States congressional district border maps in Kansas, presented in order of time. All redistricting events in Kansas between 1973 and 2013 are shown.

All content from Kiddle encyclopedia articles (including the article images and facts) can be freely used under Attribution-ShareAlike license, unless stated otherwise. Cite this article:
Kansas's congressional districts Facts for Kids. Kiddle Encyclopedia.