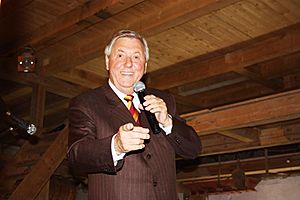 Moik was born in Linz.

He became famous in Austria, Germany, German-speaking Switzerland and South Tyrol as the television presenter of Musikantenstadl on Austrian broadcaster ORF. He presented Musikantenstadtl from 1981 to 2005 earning him the honorary title by fans as Mr Musikantenstadl.

All content from Kiddle encyclopedia articles (including the article images and facts) can be freely used under Attribution-ShareAlike license, unless stated otherwise. Cite this article:
Karl Moik Facts for Kids. Kiddle Encyclopedia.