Katherine Alice Applegate (born October 9, 1956) is an American young adult and children's fiction writer, best known as the author of the Animorphs, Remnants, Everworld, and other book series.

Applegate's most popular books are science fiction, fantasy, and adventure novels. She won the Best New Children's Book Series Award in 1997 in Publishers Weekly. Her book Home of the Brave has won several awards. She also wrote a chapter book series in 2008–09 called Roscoe Riley Rules. 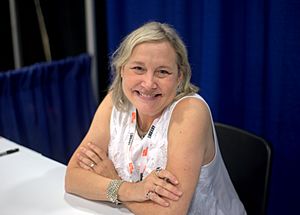 Applegate was born in Ann Arbor, Michigan. Since then she has lived in Texas, Florida, California, Minnesota, Illinois, and North Carolina. After living in Pelago, Italy for a year, she moved back to Irvine, in Southern California. She got her start as a ghostwriter for Sweet Valley Twins.

In 1997, she and her husband, Michael Grant, her co-author on many projects including Animorphs and Everworld. Applegate is best known for science fiction and fantasy, which is reflected in her famous series: Animorphs. She has also written many realistic fiction novels, especially about girls in high school. She wrote many of them for Disney Press.

Her book Home of the Brave has won the SCBWI 2008 Golden Kite Award for Best Fiction, the Bank Street 2008 Josette Frank Award, and is a Judy Lopez Memorial Award honor book.

Applegate won the 2013 Newbery Medal for The One and Only Ivan, illustrated by Patricia Castelao and published by HarperCollins. This annual award, granted by the American Library Association, recognizes the previous year's "most distinguished contribution to American literature for children." The story is written from the viewpoint of a gorilla living in a glass cage in a shopping mall. According to the award committee, "Katherine Applegate gives readers a unique and unforgettable gorilla's-eye-view of the world that challenges the way we look at animals and at ourselves."

All content from Kiddle encyclopedia articles (including the article images and facts) can be freely used under Attribution-ShareAlike license, unless stated otherwise. Cite this article:
Katherine Applegate Facts for Kids. Kiddle Encyclopedia.