Kathryn Janeway is a fictional character in the Star Trek franchise. As the captain of the Starfleet starship USS Voyager, she was the lead character on the television series Star Trek: Voyager, and later a Starfleet admiral, as seen in the 2002 feature film Star Trek: Nemesis. Although other female captains had appeared in previous Star Trek episodes and other media, she is, to date, the only one to serve as the central character of a Star Trek TV series. She has also appeared in other media including books, movies (notably Nemesis), and video games. In all of her screen appearances, she was played by actress Kate Mulgrew. 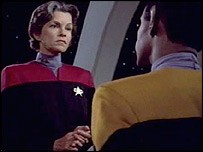 The character was originally named Elizabeth Janeway, after the noted writer of the same name. However, after Geneviève Bujold was cast, she requested the character to be renamed "Nicole Janeway". Bujold, whose experience was mainly in feature films, was unprepared for the schedule demanded by the television series, was unwilling to do news interviews, and dropped out on the second day of filming for the pilot episode "Caretaker". Kate Mulgrew, who had previously auditioned for the role, was brought in. She suggested that the name to be changed to "Kathryn", to which the producers agreed. 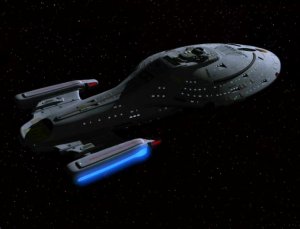 USS Voyager is the fictional Intrepid-class starship, it is commanded by Captain Kathryn Janeway

Kathryn Janeway was born on May 20, in Bloomington, Indiana on Earth. She was the daughter of Vice Admiral Janeway and had at least one sister, who she described as the artist in the family. Janeway was very close to her father, who taught her to look at the universe with a scientist's eye and she was devastated at his death. Her first mission after graduating the academy was as a science officer on the USS Al-Batani, where she served as Chief Science Officer during the Arias mission.

Captain Janeway takes command of the Intrepid-class USS Voyager in 2371. Their first mission is to locate and capture a Maquis vessel last seen in the area of space known as the Badlands. While there, the Maquis ship and Voyager are transported against their will into the Delta Quadrant, 70,000 light-years away, by a massive displacement wave. 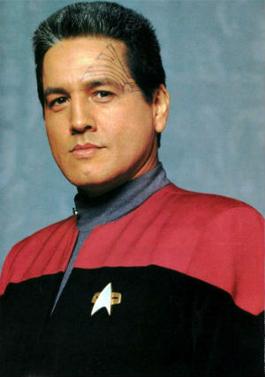 Chakotay, captain of the Maquis ship, becomes her first officer

The Maquis ship is destroyed while fighting the Kazon-Ogla, and although Voyager survives, there are numerous casualties. In order to protect the Ocampa, who live on a planet Voyager visits, Janeway destroys the Caretaker Array, the space station that transported the two ships to the Delta Quadrant, which provides energy to the Ocampa's planet, despite the fact that the Array may be the two ships' only chance to return home. In doing this, Janeway strands her ship and crew seven decades' travel from home. 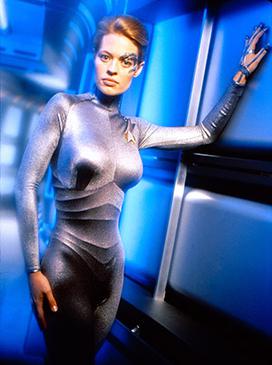 Janeway's other interactions with her crew include helping the de-assimilated Borg Seven of Nine reclaim her individuality and humanity and advocating for the Doctor's status as a sentient being.

During the course of the TV series, Voyager has contact with the Q Continuum on three occasions, and repeated contact with the Borg. With the intervention of a future/alternate version of herself, Janeway leads her crew in using one of the Borg's trans-warp conduits to return her ship to Federation space after having traveled through the Delta Quadrant for seven years. 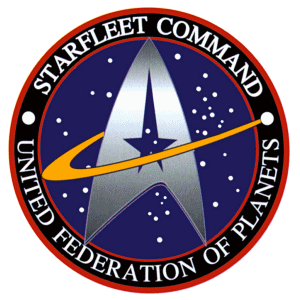 During a cameo appearance in the film Star Trek: Nemesis, now-Admiral Janeway instructs Captain Jean-Luc Picard to travel to Romulus at the invitation of the film's antagonist.

Admiral Janeway also appeared in the Borg Invasion 4-D ride at the Star Trek: The Experience venue in Las Vegas, which closed in 2008. In the ride, Janeway leads Voyager to the rescue of ride participants who are ostensibly trapped first on a space station and later on a shuttle-craft that come under attack by a Borg Cube commanded by the Borg Queen. At the ride's end, Janeway tells the participants, "Congratulations. You've defeated the Borg with one thing the Queen can never assimilate: the human spirit. As long as we have that, resistance will never be futile." 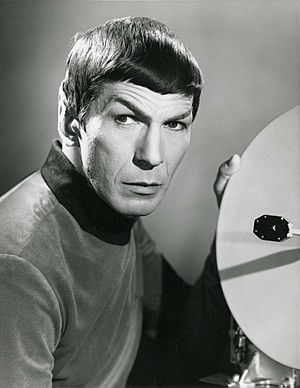 Leonard Nimoy as Spock 1967 - Ambassador Spock in the novel Star Trek: The Next Generation

Janeway has continued as a major character in the Star Trek novels that depict the events in the lives of the Voyager characters after the end of that series. In Peter David's 2007 Star Trek: The Next Generation novel, Before Dishonor, which is set after the events of Star Trek: Nemesis, Janeway is assimilated by a rogue faction of the Borg, and becomes their new Borg Queen. Seven of Nine, with the aid of Ambassador Spock and the Enterprise-E crew, manages to communicate with Janeway's consciousness, buried deep within the Queen's mind. During a brief moment of contact, Janeway helps them destroy the Borg cube, with all hands on board. Although Seven manages to escape, Janeway is killed.

Her memorial service sees a vast turnout, and a tall gleaming pillar with a light burning atop it is constructed in tribute to her. The Q female appears to Janeway's spirit, and tells her that Q and the Q Continuum had taken an interest in her. Telling her that she has a destiny, Lady Q takes Janeway by the hand, and disappears with her into realms unknown.

All content from Kiddle encyclopedia articles (including the article images and facts) can be freely used under Attribution-ShareAlike license, unless stated otherwise. Cite this article:
Kathryn Janeway Facts for Kids. Kiddle Encyclopedia.