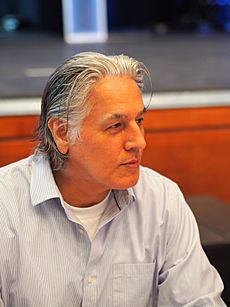 Chakotay was played by Robert Beltran across all seven seasons of Star Trek: Voyager.

Chakotay is a fictional character who appears in each of the seven seasons of the American science fiction television series Star Trek: Voyager. Portrayed by Robert Beltran, he is First Officer aboard the Starfleet starship USS Voyager. The character was suggested at an early stage of the development of the series. He is the first Native American main character in the Star Trek franchise. This was an intended move by the producers of the series, who sought to provide an inspiration as with Uhura in Star Trek: The Original Series for African Americans. In order to develop the character, the producers sought the assistance of Jamake Highwater. Despite first being named as a Sioux, and later a Hopi, Chakotay was given no tribal affiliation at the start of the series, something that was later resolved in the episode "Tattoo". Beltran is not of Native American, but Mexican descent. 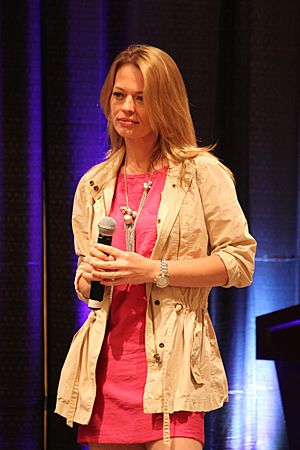 The relationship between Chakotay and Seven of Nine, played by Jeri Ryan (pictured), eventually led to romance by the end of the series.

The character first appeared in the pilot episode of the series, "Caretaker". The character continued to appear throughout the series in a main cast role, with his final appearance in the finale, "Endgame". He was featured in an ongoing storyline throughout the first and second seasons which featured the betrayal of his lover Seska (Martha Hackett) until her death in "Basics". Following his experience with disconnected Borg in "Unity", Chakotay was against an alliance with the Borg in "Scorpion" nearly leading to the death of Seven of Nine (Jeri Ryan). Despite this, by the end of the series the two characters were in a romantic relationship together. In the Voyager relaunch novels set after the vessel's return to the Alpha Quadrant, Chakotay is promoted to Captain of the ship but the relationship with Seven is ended.

Reviewers of Chakotay were critical of the stereotypical nature of Chakotay's Native American heritage. This led to comparisons with Tonto from The Lone Ranger, and that the inclusion of "Hollywood" versions of vision quests and meditation techniques were contrary to the character's in-universe tribal background. However, he was praised as a role-model for Native American science fiction and called "ground-breaking", as well as the most prominent example of a Native American character within this genre.

All content from Kiddle encyclopedia articles (including the article images and facts) can be freely used under Attribution-ShareAlike license, unless stated otherwise. Cite this article:
Chakotay Facts for Kids. Kiddle Encyclopedia.