Kazimierz Nowak (January 11, 1897 in Stryj – October 13, 1937 in Poznań) was a Polish traveler, correspondent, reporter and photographer.

Born in Stryj, Nowak lived in Poznań following World War I. From 1931 to 1936, he traveled alone, by bicycle, on foot, on horse, by boat and on camel across Africa, covering a distance of 40,000 km from Libya to Cape Agulhas, South Africa and back to Algeria. He died in Poznań from pneumonia as a consequence of emaciation of the body due to travel, malaria, and leg surgery. Photographs from his African travel were published in Poland in 1962 in the album Przez Czarny Ląd (Across the Black Land). The book was edited by Nowak's daughter Elżbieta Nowak-Gliszewska and photographs were selected after consultation with professors Jan Czekanowski and Jerzy Loth. Kazimierz Nowak's accounts of the travel were first published jointly only as late as 2000, in a book entitled Rowerem i pieszo przez Czarny Ląd (Across the Dark Continent). The Polish reporter Ryszard Kapuściński said in 2006 that it "is an utterly exceptional book", and added that:

Its content and the personality of the writer account for its compelling nature. As such, it should command greater attention and wider recognition. This incredible story unfailingly features in my lectures, discussions and commentaries on international affairs. I ardently hope that it will take place among the classics of Polish reportage.

National Geographic Traveler (Polish edition) wrote that "Kazimierz Nowak is without a doubt a master of travel reportage". On 25 November 2006, in the Hall of Poznań Main Railway Station where Nowak began and ended his travel, Ryszard Kapuściński unveiled a commemorative plaque dedicated to Nowak. 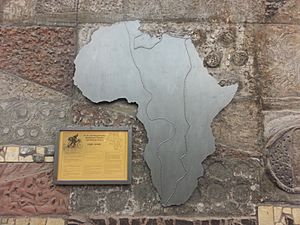 Monument in Poznań dedicated to Kazimierz and his trip across Africa

The 7th extended Polish edition of the book was published in 2013. The book was translated into Hungarian language in 2014 (Kerékpárral és gyalog a fekete földrészen át) and into English in 2017 (Across The Dark Continent. Bicycle Diaries from Africa 1931–1936). 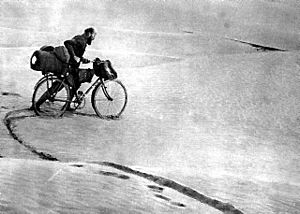 All content from Kiddle encyclopedia articles (including the article images and facts) can be freely used under Attribution-ShareAlike license, unless stated otherwise. Cite this article:
Kazimierz Nowak Facts for Kids. Kiddle Encyclopedia.