Keeler, formerly known as Hawley is a census-designated place (CDP) in Inyo County, California, United States. Keeler is located on the east shore of Owens Lake 11.5 miles (19 km) south-southeast of New York Butte, at an elevation of 3602 feet (1098 m). The population was 66 people at the 2010 census, unchanged from the 2000 census.

According to the United States Census Bureau, the CDP has a total area of 1.3 square miles (3.4 km2), all land.

Keeler is located along the eastern shores of Owens Lake (a dry lakebed) along State Route 136.

When the 1872 Lone Pine earthquake rendered the pier in nearby Swansea inaccessible by uplifting the shoreline, a new pier was constructed to the south at a community named Hawley. In 1880 a new mill was constructed at Hawley by the Owens Lake Mining and Milling Company for processing ore from the Cerro Gordo Mines in the mountains to the east. A town was laid out by the company agent Julius M. Keeler, for whom the town of Hawley was later renamed.

The steamship "Bessie Brady" brought ore from Keeler across the lake to the town of Cartago, however in 1882 the Bessie Brady was destroyed by fire. There was a 300-foot wharf at Keeler, and the steamship route cut days off the time a freight wagon would have taken to circle the lake. She carried 700 ingots at a time in a three-hour crossing. The Carson and Colorado Railroad constructed a narrow gauge railway to Keeler in 1883. The success of the Cerro Gordo mines caused Keeler to boom until silver prices plummeted in the late 1800s.

A second boom of zinc mining in the early 1900s brought new life to the town and a tramway was built to bring the ore from Cerro Gordo to Keeler. There were small surges in the mining of silver, lead, zinc, and limestone; however, by the 1950s all mining had ceased. Train service was stopped in 1960 and the tracks were removed in 1961. Water exports from the Owens Valley to the City of Los Angeles in the 1920s led the Owens Lake to eventually dry up, causing alkali dust storms to blow through Keeler, driving many residents away. Dust remediation efforts in the early 21st century reduced this problem, but few residents remain.

A post office operated at Keeler from 1883 to 1898 and is still operating today. 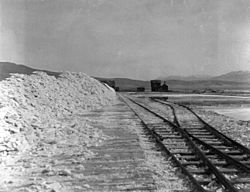 Soda works at Keeler at Owens Lake, California. Pile of carbonate of soda ready for the marker.

There were 40 households, out of which 4 (10%) had children under the age of 18 living in them, 13 (33%) were opposite-sex married couples living together, 2 (5%) had a female householder with no husband present, 2 (5%) had a male householder with no wife present. There were 0 unmarried opposite-sex partnerships, and 0 same-sex married couples or partnerships. 23 households (58%) were made up of individuals and 12 (30%) had someone living alone who was 65 years of age or older. The average household size was 1.7. There were 17 families (43% of all households); the average family size was 2.5.

There were 36 households out of which 11% had children under the age of 18 living with them, 39% were married couples living together, 6% had a female householder with no husband present, and 47% were non-families. 39% of all households were made up of individuals and 22% had someone living alone who was 65 years of age or older. The average household size was 1.8 and the average family size was 2.4.

All content from Kiddle encyclopedia articles (including the article images and facts) can be freely used under Attribution-ShareAlike license, unless stated otherwise. Cite this article:
Keeler, California Facts for Kids. Kiddle Encyclopedia.