Kelburn is a central suburb of Wellington, the capital city of New Zealand, situated within 1 kilometre (0.62 mi) of the central business district.

Kelburn sits on the hills just west of the capital's central business district and is bordered by the Botanic Garden and the suburbs of Thorndon and Northland to the north, the suburbs of Karori and Highbury to the west, and Aro Valley to the south.

The iconic Wellington Cable Car is a tourist attraction and public transport facility. Operating since 1902, it is a funicular railway that ascends from Lambton Quay in the central business district to Kelburn. The Wellington Cable Car Museum is next to its Kelburn terminus.

The Wellington Botanic Garden comprises 25 hectares of native forest, gardens and displays, and has entrances adjacent to the Kelburn terminus of the cable car and on Kelburn's Glen Road.

The main campus of Victoria University of Wellington is in Kelburn, and is home to the category 1 listed Hunter Building, the Adam Art Gallery and the Adam Concert Room. The cable car has a University stop next to Kelburn Park, which serves as a University and community sports ground.

The Carter Observatory includes a planetarium and exhibition, and is located within the Botanic Garden, close to the Kelburn terminus of the cable car.

The Kelburn Viaduct was one of New Zealand's earliest reinforced concrete bridges, and provides vehicle and foot access to Karori and other Western suburbs.

The suburb of 'Kelburne' was established after the Upland Estate Company purchased farmland from William Moxham in 1896. It was named after Viscount Kelburne, son of the Governor of New Zealand at the time. The 'e' at the end of 'Kelburne' was later omitted to avoid confusion with the suburb of Kilbirnie.

In 1898, the investors formed a company to build and operate the cable car, to distinguish the nascent suburb from competing residential developments. Kelburn was populated quickly following the opening of the cable car in 1902, with Victoria University's Hunter Building opening in 1904, the Dominion Observatory in 1907, construction of St Michael's Church in 1912, and of Kelburn Normal School in 1914.

The population of Kelburn was 3,642 at the time of the 2006 Census. Kelburn has a greater proportion of high-income households than the capital as a whole, and homes in the suburb are among the city’s most valuable. As well as homeowners, residents of Kelburn include undergraduate and postgraduate students seeking to live in the vicinity of Victoria University. 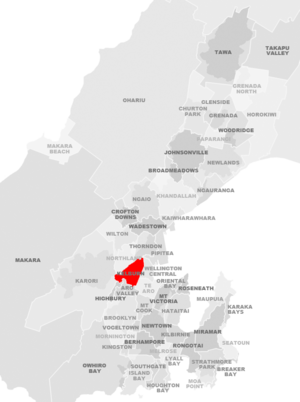 All content from Kiddle encyclopedia articles (including the article images and facts) can be freely used under Attribution-ShareAlike license, unless stated otherwise. Cite this article:
Kelburn, New Zealand Facts for Kids. Kiddle Encyclopedia.