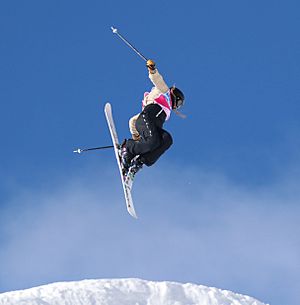 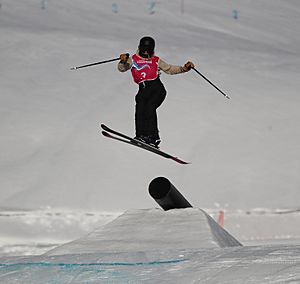 During the final at the very same place

During the Big Air competition of the 2017 Winter X Games Norway, Sildaru became the first woman to ever land a Switch 1260° Mute and a 1440° during a competition.

Because of her young age, the first World Cup event she was allowed to participate in was on 27 August 2017 in Cardrona, New Zealand. She won the slopestyle competition.

Despite being the gold medal favorite for the women’s slopestyle event in 2018 Winter Olympics, she missed competing in the Games because of a knee injury.

However, in the 2020 Youth Olympic Games she won a gold medal for the Women's Freestyle Skiing.

All results are sourced from the International Ski Federation (FIS).

All content from Kiddle encyclopedia articles (including the article images and facts) can be freely used under Attribution-ShareAlike license, unless stated otherwise. Cite this article:
Kelly Sildaru Facts for Kids. Kiddle Encyclopedia.