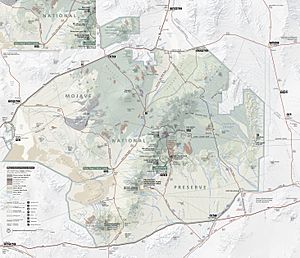 Map of the Mojave National Preserve and the Kelso Wash

Precipitation in the area averages about 100–200 millimetres (4–8 in). Groundwater close to the surface and runoff sustain Kelso Wash. Dunes frequently blocked its course, impounding temporary lakes that filled with sediments during the early Holocene.(Sweeney and others 2020, p. 2328) The wash has cut as deep as 11 metres (36 ft) into the ground, and its course is flanked by river terraces.(Sweeney and others 2020, p. 2318) The Union Pacific Railroad closely parallels the wash (Ramsey and others 1999, p. 661).

All content from Kiddle encyclopedia articles (including the article images and facts) can be freely used under Attribution-ShareAlike license, unless stated otherwise. Cite this article:
Kelso Wash Facts for Kids. Kiddle Encyclopedia.