On 18 June 2014, a Turkish court sentenced him to life imprisonment and demotion of his military rank down to private, from army general, for leading the military coup in 1980, obstructing democracy by deposing the prime minister Süleyman Demirel, abolishing the parliament and the senate and abolishing the constitution.

Prosecutors sought life sentences against them. The first court hearing of the case was scheduled for 4 April 2012. Both were sentenced to life imprisonment on 18 June 2014 by a court in Ankara. This sentence was on appeal at the time of his death. 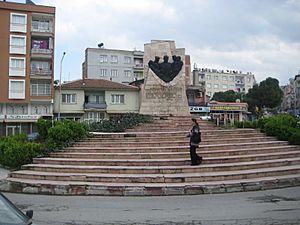 A monument to Kenan Evren in Alasehir, Turkey

Kenan Evren was born in Alaşehir, Manisa Province. Evren was of Albanian descent on his father's side that originated from Preševo, while his mother was from a Bulgarian Turkish background. After going to elementary school and middle school in Manisa, Balıkesir and Istanbul, he attended military high school in Maltepe, Ankara. In 1938, he graduated from army school and in 1949 from military academy as a staff officer.

From 1958 to 1959, he served in the Turkish Brigade in Korea. In 1964, he was promoted to general. Evren served at various posts as Army Chief. He was the commander of Operation Gladio's Turkish branch; the Counter-Guerrilla. The Counter-Guerrilla was an anti-communist "stay-behind" guerrilla force set up with the support of NATO. He became Chief of General Staff in March 1978.

Evren died at a military hospital in Ankara on 9 May 2015, aged 97. On 12 May, he was buried in the Turkish State Cemetery in Ankara following the funeral service held at Ahmet Hamdi Akseki Mosque. The funeral was attended by his close relatives and military personnel. In protest, political parties sent no representatives to the former president's funeral. A number of people protested during the religious service in the mosque's courtyard.

All content from Kiddle encyclopedia articles (including the article images and facts) can be freely used under Attribution-ShareAlike license, unless stated otherwise. Cite this article:
Kenan Evren Facts for Kids. Kiddle Encyclopedia.