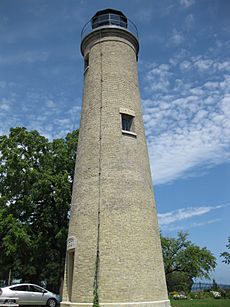 Also known as the "Old Kenosha Light", it was replaced by the Kenosha North Pier Light in 1906. The keeper's house continued to be used for many years, however.

The light is listed in the National Register of Historic Places as the Kenosha Light Station, Reference #90000995. It has been an active aid to navigation since 1996, but is not listed in Volume VII United States Coast Guard light list. The lantern room was removed in 1913 but replicated in 1994. The Fresnel lens was replaced by a 300 mm Tidaland Signal plastic lens – a medium range lens commonly used on the Great Lakes.

A historical marker in front of the lighthouse reads:

Built by the federal government in 1866, the Kenosha Lighthouse replaces two other lighthouses constructed at this site in 1848? and 1858?. Originally designated a coast and harbor light for Southport, now Kenosha, Wisconsin provided the first navigational illumination a mariner would see upon entering Wisconsin from the Chicago area. Standing 55 feet (17 m) tall and situated on a hill, the lighthouse projected light from 74 feet (23 m) above lake level. The tower is built of yellow Milwaukee Cream City brick and is conical in shape. Originally the lighthouse contained a fourth order Fresnel lens fueled by kerosene with a fixed?-white light which varied by flashes. Officially discontinued in 1906, the lantern room was later removed and replaced by a 25-foot (7.6 m) tripod mast for displaying storm warning flags and lights. Listed in the National Register of Historic Places in 1990, the lighthouse has been restored and holds an automated electric light. (1996)

A lightkeeper's house sits near the lighthouse tower. The original section of the house was built in 1866 at the same time as the lighthouse. It was two stories, with walls of cream brick similar to the tower, with a simple rectangular footprint. The moderate pitch of the roof and the frieze board under the eaves come from Greek Revival style. In 1907 the north ell with the two-story porch was added to the house, along with a 2-story addition to the kitchen at the southeast corner and bathrooms.

The light on Simmons Island was part of an effort to make Kenosha a major shipping port, and money was spent from the 1830s to the 1880s on infrastructure like the lighthouse. But this lighthouse was too far from the harbor to give entering craft a clear bearing, so a beacon was added to the pierhead in the 1860s. By the turn of the century, the better harbors and railroad connections at Chicago, Milwaukee and Racine prevailed and Kenosha was a minor port.

The building is currently maintained by the City of Kenosha and the Kenosha County Historical Society. It is also on the State List/Inventory, having been listed in 1975.

The keeper's house is open to the public on Saturdays and Sundays during the tourist season. The tower is open for climbers many weekends of the summer.

The lighthouse can be seen from Kenosha near the vicinity of 50th Street and 4th Avenue.

All content from Kiddle encyclopedia articles (including the article images and facts) can be freely used under Attribution-ShareAlike license, unless stated otherwise. Cite this article:
Kenosha Light Facts for Kids. Kiddle Encyclopedia.