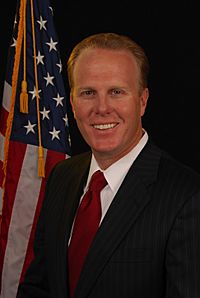 Kevin Lee Faulconer (born January 24, 1967) is an American politician. He is the current mayor of San Diego, California, serving since March 2014. From 2006 to 2014, he served as a member of the San Diego City Council. He is a Republican.

Faulconer was born in San Jose, California. He grew up in Oxnard.

All content from Kiddle encyclopedia articles (including the article images and facts) can be freely used under Attribution-ShareAlike license, unless stated otherwise. Cite this article:
Kevin Faulconer Facts for Kids. Kiddle Encyclopedia.