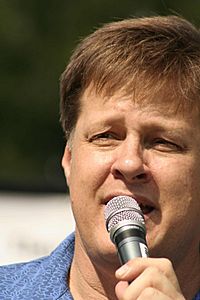 Kevin Bruce Zeese (October 28, 1955 – September 5, 2020) was an American lawyer and political activist. His work focused on ending the War on Drugs and mass incarceration. He helped organize the 2011 Occupy encampment in Washington, D.C. at Freedom Plaza. He was co-director of Popular Resistance.

He ran for the United States Senate in Maryland in 2006. He lost the election to Ben Cardin. He was born in New York City.

Zeese died on September 5, 2020 in Baltimore City, Maryland from a heart attack, aged 64.

All content from Kiddle encyclopedia articles (including the article images and facts) can be freely used under Attribution-ShareAlike license, unless stated otherwise. Cite this article:
Kevin Zeese Facts for Kids. Kiddle Encyclopedia.