Kewanee is a city in Henry County, Illinois, United States. "Kewanee" is the Winnebago word for Greater Prarie Chicken, which lived there. The population was 12,916 at the 2010 census, down from 12,944 in 2000.

There were 5,353 households out of which 28.5% had children under the age of 18 living with them, 47.0% were married couples living together, 12.3% had a female householder with no husband present, and 36.9% were non-families. 32.2% of all households were made up of individuals and 17.7% had someone living alone who was 65 years of age or older. The average household size was 2.38 and the average family size was 2.98. 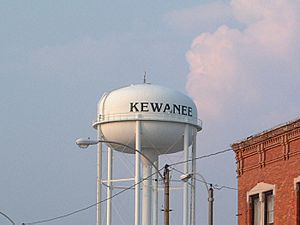 Kewanee has many different types of parks in the immediate area, offering a variety of activities such as boating, camping, hunting, fishing, playgrounds, baseball fields, and more. Parks inside the city limits are run by the Kewanee Park District. Outside of Kewanee there is one city park named Francis Park which has picnic and camping facilities. Also outside of Kewanee is Johnson's Sauk Trail State Park which offers hunting, boating, camping, picnicking, and other seasonal activities. Below is a listing of the parks in and nearby Kewanee:

The most notable festival held in the community is Hog Days. It is held annually on Labor Day weekend. Events include a carnival, mud volleyball, a parade, and more. More information including a history of the event is available at http://kewaneehogdays.com. 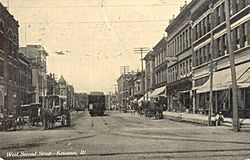 The Kewanee Amtrak station serves trains on the Carl Sandburg and Illinois Zephyr daily. The current station was completed April 13, 2012. The new depot offers a modern look and a much upgraded space for travelers to wait for trains. http://www.greatamericanstations.com/Stations/KEE/Station_view

All content from Kiddle encyclopedia articles (including the article images and facts) can be freely used under Attribution-ShareAlike license, unless stated otherwise. Cite this article:
Kewanee, Illinois Facts for Kids. Kiddle Encyclopedia.