Kilkelly (Irish: Cill Cheallaigh) is a village in Kilmovee parish County Mayo, Ireland. It is just south of Ireland West Airport Knock, lying between the Airport and the town of Knock itself. The village is along the N17, a national primary road running between Galway and Sligo. 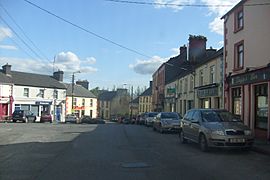 Kilkelly is a small village, notable due to the song "Kilkelly, Ireland", written by American songwriter Peter Jones. In the late 1970s or early 1980s, Jones discovered a collection of century-old letters sent to his Irish emigrant ancestor in America from that ancestor's father in Kilkelly. Jones wrote a ballad based on the contents of those letters, conveying the experience of his own family as well as others who were separated permanently by emigration.

All content from Kiddle encyclopedia articles (including the article images and facts) can be freely used under Attribution-ShareAlike license, unless stated otherwise. Cite this article:
Kilkelly Facts for Kids. Kiddle Encyclopedia.