The Town of Kim is a Statutory Town in Las Animas County, Colorado, United States. The population was 74 at the 2010 United States Census. As of 2014[update], the town included a complete school system (grades K-12), a post office, and a general store.

A post office called Kim has been in operation since 1917. The town was named after the novel Kim by Rudyard Kipling.

According to the United States Census Bureau, the town has a total area of 0.3 square miles (0.78 km2), all of it land.

Kim is located on the plains of southeastern Colorado and the elevation is 5690 ft (1734 m). 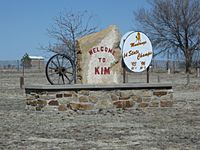 There were 38 households out of which 15.8% had children under the age of 18 living with them, 36.8% were married couples living together, 2.6% had a female householder with no husband present, and 60.5% were non-families. 60.5% of all households were made up of individuals and 15.8% had someone living alone who was 65 years of age or older. The average household size was 1.71 and the average family size was 2.80.

Kim experiences a semi-arid climate with hot summers and cold winters. Due to its high elevation and aridity, temperatures drop sharply after sunset. While daytime summer temperatures often exceed 90 degrees, nights are cool. Spring and Fall are mild. During the winter, temperatures can drop below zero at night, but are usually above freezing during the day. Kim receives most of its precipitation in the spring and late summer. Snow falls several times each winter, but rarely exceeds a few inches. Most snow melts within a few days, even in December or January.

All content from Kiddle encyclopedia articles (including the article images and facts) can be freely used under Attribution-ShareAlike license, unless stated otherwise. Cite this article:
Kim, Colorado Facts for Kids. Kiddle Encyclopedia.